Tonight’s run commenced from the park in Paradise Parade, Paradise Point and consisted of the hardy and dedicated souls who cannot afford to go tripping all over the world for most of the year, unlike the 15 or so who are gallivanting all over New Zealand at the moment.

The theme of the run was touted as “food to die for” but really it was a cover for the joint birthday bash for VETERAN and FLASHER…happy 70th birthday guys and thank you for your generosity in providing all of the birthday wine, which resulted in the GM looking into the booze bucket at the end of the night and commenting “this is fucked! We haven’t made any money on booze tonight thanks to those pricks!”. Needless to say we all stayed clear of everything but the free booze!

The run started in an easterly direction down one of the duck-themed streets, onto The Espanade and south we went…and went….and went …and went with several of our number wheezing and whining “haven’t they put any checks in???….how far are we going to run on the streets??” as we continued heading in the direction of Southport. Suddenly we found ourselves doing a sweeping right hand turn into Poinsettia Street, somewhere in the depths of Runaway Bay before we headed into the wilds of the Pine Ridge Conservation Park…we need not have worried about this being a run restricted to bitumen!!

Obviously this was the part of the run set by Veteran who was obviously intent on keeping fresh in our minds the trials and tribulations of our beloved ‘Nashos conscripted into the Australian Army and sent off into the wilds of the Vietnam jungles where they had to traverse rivers and swamps with their machine guns held high above their heads…in this case, it was our mobile phones and torches held high as we traversed the streams and swamps, following some high-set toilet paper (how did those two short arses get the paper so high up in those trees??).

We all managed to conquer the run, with most of us getting back to the park in one piece and only one of us going for a full dunking in the swamp…good one Miscarriage! A check for leeches and other mishaps led to an “all clear” for all of us and the frivolities started.

The nosh started with cheese and crackers…always goes down well and just shows that the old adage of “keep it simple stupid” (the KISS principle) works a treat! This was all washed down mostly with the free wine provided by our generous hares.

Main course consisted of a pasta dish with a lovely creamy sauce and chunks of ham and mushroom which Flasher assured us were all resting down the bottom of the pot. The pasta went down really well and many of us went back for seconds (and thirds!). Of course there always has to be some negative comment…this is the Hash after all…and Circumference stepped up to the plate tonight with the quip…”there’s only one thing missing…flavour!!”. Most of us must be on Rug’s low carb, low GI diet as the bread was hardly touched. Dessert consisted of the trifle which Flasher had been raving about all day on his Facebook page, prompting a comment from afar from Rectum and accusing Flasher of gross cruelty if he was planning to inflict that concoction on his Hash mates. Most of us thought it was a bloody great effort and all praise to Flasher and Veteran for a great effort on the Nosh.

Circle was a subdued affair and for the second week in a row it was a sit-down affair and relatively subdued since being castigated by an irate neighbour several weeks ago with the words “keep it down you pack of pissheads!”. Birthday wishes were sung for our two septagenarians and returning runners were warmly welcomed back into the fold…Veteran…. who never runs out of his postcode, Aussie…who has been in Lousiana, Mississippi and Texas, making a fool of himself going arse over tit outside a loo and not suing for $30 million and last but not least, Missing Link…who has been in Sri Lanka with Mrs Link and Mr and Mrs Bouncer. We also welcomed visitors Anchovie, a Brisbane Hashman and Yumhhh from the UK somewhere, who advised that his Hash name means “Your Unworthy Master of the HHH”…confusing…what’s wrong with a normal, offensive Hash name? Anyway, he got so bored with the proceedings that he fell asleep half way through circle…must be the jet lag or did the arduous walk take it out of him? Kurt, from Germany is still with us and continues to doss down at Bent Banana’s palatial home.

The POW is held over for another week and the Useless award went to Flasher for no reason other than he is…. well…Flasher! 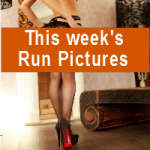