Gold Coast H3: How It Started

In early 1978, I moved from Cairns to the Gold Coast, where I had arranged to meet Geoff Lewis, the CEO of the Broadbeach International Hotel, on a private matter. When we met, I was wearing a Cairns H3 inaugural T-shirt. Geoff had recently returned from a brief holiday in New Caledonia, where he was taken as a guest on an H3 run.

Upon noticing my T-shirt, Geoff said words to the effect: “Ah! What we need is a Hash House Harriers here.”

Having started the Cairns Hash and having run for two years with the Singapore Hash, I told him I would be more than happy to kick-start a Hash for the Gold Coast. However, I had no contacts there at the time. If Geoff could supply the “soldiers,” I would put it all together.

Geoff responded with alacrity and his usual enthusiasm and arranged for me to meet possible candidates for the new Hash committee. Geoff suggested that Bob Hutchison and Peter Skinner would be excellent committee members.

On meeting these two with Geoff, I had no hesitation in agreeing that they were ideal for helping us with the Hash. Peter was a public relations consultant, and Bob was prominent in the tourist industry. It was arranged that Bob would be Hash Cash and Peter would be On-Sec, and we would have two joint masters, similar to Cairns and Singapore.

I asked Geoff if he would like to be the emcee of the Hash. He responded by saying that his commitments to the hotel made that role difficult and suggested I take that position.

We four melded together as a cohesive team of the highest order. At no time was there any dissent, argument or unhappiness as we planned the new Hash.

We had a small pre-inaugural meeting at which I asked the assembled group would they prefer to be a mixed Hash or solely a male Hash. The overwhelming response was male only. 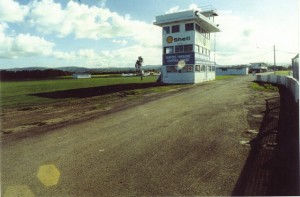 The Brisbane Hash cooperated by sending a busload of Hashmen for the first run. Geoff, Peter and Bob had set up about 50 interested blokes for the run. We arranged to take over the headquarters of the International Motor Raceway in Surfer’s Paradise and for topless girls to be present to fill up the beer glasses as they emptied. Thanks to Geoff’s contacts with the 4X Brewery in Brisbane, they agreed

to supply the beer for the On-On. Geoff also designed some terrific T-shirts for the run.

At the On-On, I announced the formation of GCH3 and closed the membership immediately

– to make things easier for administrative and logistics purposes for the committee.

Last and not least, there was another player involved of the upmost importance. She was Karen Lewis, Geoff’s wife. She was a most extraordinary woman who realized that Geoff, with his heavy work commitments and responsibilities, needed some outside relaxation and backed his involvement with the Hash without reservation.

Of all the Hashes I have known and run with over the years, I have never known a Hash with such a beautifully organized start. It set the foundation for the solidarity of the Hash for years to come and probably still does.