Tonight’s run took place adjacent to one of my workplaces, the Oxenford Youth and Community Centre, which was indeed fortunate as a few of us had to make good use of the facilities in the centre tonight. The run tonight was brought to you by Flasher as the hare, who went to great pains to emphasise that he was only responsible for the run and had absolutely, repeat…absolutely NOTHING to do with the so-called “nosh” which was “prepared” by Showpony…and I purposely use inverted commas to describe it, but more about that later!!

It has been suggested to me that the run tonight should have been called the Jonestown Massacre run…and for those of you who were present, the following photograph may well remind you of what happened on Monday night………….. 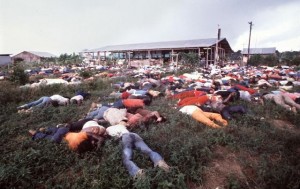 …..yep, there were hashmen all over the place, in various states of gastro-intestinal disrepair!!….some normally hardy souls including Josephine, Sir Blackstump, Swindler, Magician, Sir Prince Valiant, Big O and Bent Banana all succumbed to the noxious offering which had been described as “Show Pony’s Poisonous Pies” which we all thought was supposed to be a bit of a joke, but sadly gents, if it was meant to be a bit of a joke, it certainly backfired BIG TIME!!! I am told that never, repeat..NEVER in the history of hash has there been an intention to harm the participants, but quite frankly, many of us felt that this was indeed the case on Monday…..here is but one sample of several angry emails that I have received today…..

“those hares last night could have killed somebody; seriously. Blackie has had issues with a hole in his stomach, Big O is supposed to have had an ulcer and Now Loved is full of radiation. Josephine & Magician could have had a heart attack and they were obviously in serious discomfort, laying on the ground in agony.That prank may be suitable for adolescents but out of place for us old farts.
I had several good chucks when I got home, by forcing my finger down my throat, as I had serious stomach cramps”.

I can only sympathise with the writer of this email regarding trying to rid his stomach of its vile content because more than one of us tried to do the same thing after ingesting the SHIT that was dished out to us!!…as for whatever else was on offer, which I believe may have been chicken and prawns, well, fuck trying that for a joke!!! I personally was in too much pain and in quite some distress not only at my own pain, but at seeing others suffering equally if not more badly than myself to contemplate having either any of the mains or the dessert that was on offer…and I know that many of us felt the same way.

Given the events that followed the run, I could not even be bothered with gracing the run with any words….am I offending anybody by adopting this attitude??…see if I give a flying fuck!!! As far as I am concerned, whoever had anything at all to do with organising the debacle ought to seriously consider their future as hashmen, they really should…isn’t it supposed to be about mateship and having a good time together??? Well tonight demonstrated that some don’t give a shit for the welfare of their fellow Hashmen…to see those guys lying on the ground writhing in pain and not give a shit???……I am SO ANGRY!!!! ….and to then have the gall to laugh about it??? Give me a fucking break!! Personally if it had been me that had had anything to do with the events of tonight, I would make a point of absenting myself from Hash until the events of tonight had been long forgotten…SHAME, SHAME, SHAME ON YOU!!!

There were some funny incidents in Circle tonight, but all, in my mind at least, long forgotten and paling into insignificance due to the total fuck up that was tonight…all I can say is that the PRICK OF THE WEEK was well deserved and ought to stay with the recipient in perpetuity!!!

Don’t agree with anything I’ve said???….take it up with somebody who fucking cares!!!…want to have a go at me about what I’ve said???…ohh, please…as they say…have your go!!!

ON A PLEASANT NOTE TO END THE REPORT WITH…..WEEKLY’S SON BRADLEY WILL BE PERFORMING ON CHANNEL 9 THIS SATURDAY AT THE IGA CAROLS SO PLEASE ALL DO WATCH HIM!!!