A fun night was had by all. Great company and top nosh food. Many thanks to the Swindler’s for providing a great venue and to the Hierarchy and the other helpers for organising the event.

Videos of The hash Tenor below 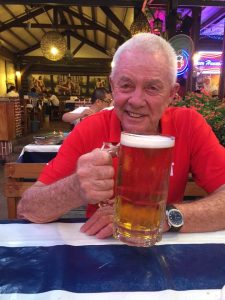 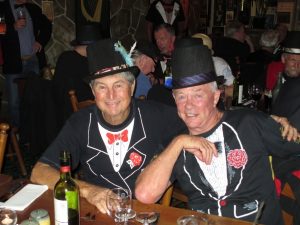 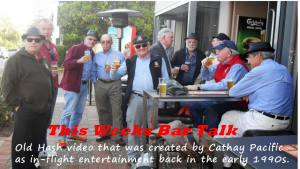 The evening kicked-off with pre-dinner drinks in Budds Beach Park before the 53 Hashers and partners moved to the restaurant.
Excellent food ranging from a variety of ten tapis numbers like smoked salmon on potato rosti; chorizo & scallops; Peking duck pancakes through to steak and seafood dishes, finishing with ham rolls followed by desert tarts.

All of this with ever flowing volumes of beer and bubbly supplied by our caring Committee.
Rockhard’s daughter Kirsten came along under the close supervision of her protective dad – it was her birthday and as a surprise her current squeeze from Adelaide popped-in unannounced … Rockhard looked a little concerned as the groping couple slid outside into the darkness of the night.

Santa (with a slight resemblance to Caustic) also joined us, just long enough to hand out Hash Christmas presents.

Sir Slab received a lovely slab of concrete which he promptly dumped – Santa was not impressed.

Custic a jar of caustic soda

Rectum was given a sharp metal stopper, no doubt for inserting in rectum like places.

Veteran received a rifle, just like the one he played with as a kid in Vietnam.

Phantom was given a phantom mask.

Prawnstar loved his plastic sea-slug …. and so on it went.

Sir Rabbit won the Lucky Door Prize … how lucky is he: 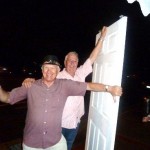 All up, an enjoyable evening … as they say: Great food, great wine and great company.

That’s about all I can remember. One last thing!! Thanks Aussie for making me drink more Red wine till 3 in the morning. Jocelyn was very impressed. Lol

A fine gathering of around 33 Hashers and partners joined in the festivities of the annual Budd’s Beach bike ride day. The group enjoyed the fine weather, 16km ride and drink stop along with with a fine picnic lunch and refreshments. Thanks to all for coming along and thanks to those who helped make it a great day.

Bike Hash has training run before heading to Vietnam.

News flash: Flasher is now leaving 2 days earlier for the 2011 trans Asia Hash Bikeathon.
He has found a suitable bicycle for sale that he reckons will be capable of getting him over the line a few feet before the other hash contenders.
Furthermore the price is right…… 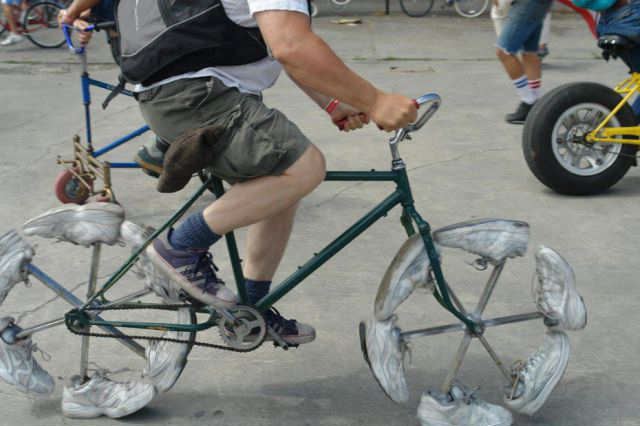 Some 46 Hashers and partners showed up at Helensvale for a great afternoon munching on some 80+ gourmet pizzas, salads and desserts prepared by our own Master Chefs, Botulism, Pizza and Cappuccino. The RA, Josephine, was called upon on his day off to control the rain for the 5 hours of the event. Not long enough for myself, as my dear wife decided we should walk the last 500 meters home to save on our maxi taxi doing unnecessary extra distance only to see us soaked by driving rain and 40 knot winds, bloody terrific.

Now Loved made a welcome return and though a bit wearied by his experience was in good spirits and very positive, great to see him back.

A great day had by all and a big thanks to all involved and all who could attend.