From the Archives.. Words from Run 1

Weeks to Christmas Bash – About 19

It was billed as the Surfers Novelty/Olympic run, as the Hare explained that an authentic Olympic torch (manufactured by Sir Rabbit) was to be carried ‘baton relay style’ for the duration. Instructions (far too complex for us simple folk) were also given for the carriage and rewarded return of a miniature inflatable doll (which looked full size when flasher had it)

That said, we set off to a smattering of arrows, which eventually led us through Chevron Renaissance, I handed to the torch to the second recipient, Jigsaw who within five minutes had vanished and was never to be seen on the route again. (so much for baton relay style)

The route took us through hordes of bemused tourists, through shopping malls, and on and off the Esplanade in a northernly direction.

Macintosh bridge led us back towards the Gold Coast Highway and civilization, the trip under the sundial bridge was omitted due to high tide, as I emerged on the south side of the bridge I saw the serial short cutting bast#rd that is flasher who had nicely removed the Macintosh bridge section but was claiming the whole route as per usual.

On home was sighted after the board walk leading to Budds Beach and Shateaux Shat. Overall not many checks or false trails but the novelty aspects made it a memorable outing.

Under the strobe lighting we were offered unnaturally red coloured sausages, steaming hot, alongside bowls of tomato ketchup and loaves of bread, a hungry (and slightly cold) pack devoured the starter and then tucked into the mains – roast chicken, potato, pumpkin and garden peas with gravy. Dessert was apple pie custard and ice cream. Mrs. Coles or Mr. Woolworths had been very busy preparing the feast.

The new whistle was moistened to indicate circle was commencing. The hare was invited out, cross examination showed Veteran set the trail, KB managed the portion control, Joss finished off where Mrs. Coles had started and Shat …..well….…he had the ‘Concept’.

Someone, I cant remember who, scored the run 7.75 and Sir Slab described the food as ‘Bloody fantastic’ scoring an 8+.

DD to Jigsaw as a proxy for Caustic, for a dummy spit at the casino which McEnroe would have been proud of. I was asked not to mention that it was felt that Caustic could not drive a “finger up his own arse” so I wont.

It seems, according to the Bulletin, that there was in fact more than one type of hash at last weeks run, this could explain Sir AH’s absence, permanent smile and constant request for nibbles.

POW finally re-awarded to Ferret despite protests and denials for failing to follow the complex rules regarding the inflatable lady.

Rectum
On Sec
Some of the above may be untrue.

Rug on Tour
Having just returned from Olympic torch duty with SH3 I enclose a picture taken on the Monday Hash on the day that the Olympic torch passed through Scarborough, North Yorkshire, my home town.

On the evening as I ran through the streets carrying the torch with the pack following, locals tooted their horns and I am sure many would have gone home to say they had seen the Olympic torch heading out of Scarborough on the evening. 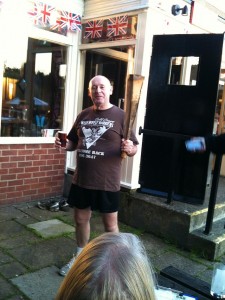