Always a popular combination, like Butch and Sundance (though more Waldorf and Statler [the old giffs from the muppets, dumkopf]), the Sirs drew a healthy sized group on a balmy and rather overcast evening on the southern Gold Coast.
Elvis and Nasty are clearly in competition for ‘most consecutive appearances by a guest runner’ 2-all so far.

Once again the New Year drawing out some old favourites, Now Loved, Sir AH amongst others.

We commenced with a piss weak excuse regarding bad weather and lack of time, so it’s a short run etc etc from Sir Slab who set us off in the direction of Robina Parkway underpass. I noticed the running contingent was higher this week and fewer stayed to help with the shipping container of food, are the New Years resolutions helping to motivate some?

We ran under the bridge and onto the nearby estate where the markings were fine despite light rain, there was good use of checks – some throwing everyone with unexpected direction changes down grassy ginnels and alleyways. No check backs were evident nor false trails marked but the pack of about nine runners held together in the main, finally emerging out of the estate alongside Robina shopping centre.

At this point our Hare had cleverly orchestrated our merging with the large band of athletes in rehabilitation (the walkers) and so we headed on home, finishing around the forty-minute mark. Not the longest of runs but most agreed, with the heat and humidity, long enough. Special mention to the effort put in by Caustic and Head Job, that degree of speed and effort is normally preserved for last orders at Darcy arms.

The Robina runs are not Robina runs without the obligatory attendance of Dim Sims and, although fewer in number, they were present and awaiting a date with the spring rolls in a hot wok.

The entrees were devoured voraciously, causing the removal of several layers of skin from the fingers and throats of those who couldn’t wait for them to cool and as the mains were taking a little longer to prepare, the pack set about the beer.

Once again the eskies began to empty at an alarming rate, not helped by Head Job who walked off with four bottles of the finest. Fearing a lynching, the GM sent the Booze masters around to his mate Dan Murphy’s to avert the crisis.

Thankfully it wasn’t long before the eskies were overflowing with WARM beer so most opted for a change to wine.
During the lull Sir Slab kindly donated a number of Hash garments for those with few and these were picked over by Sir AH, 2 dogs and others clearly down to their last three wardrobes of Hash shit.

A mild case of dementia overtook Circumference who, assuming he was at a Greek wedding, began smashing dishes; he was taken to a dark corner to settle.

Stir-fried chicken (great job by Nasty) accompanied by capsicum, onion and mango laid atop a bed of (boiled or blanched?) rice and some greens, which I never got a whiff of, head-lined the gig. Very tasty (three helpings) indeed.

Heeding the disappointment exhibited on the last two Robina jaunts, Sir Prince succumbed to peer pressure and pumped out the infamous banana fritters with ice cream to top off the evenings epicurean delights. Nice job.

Circle brought to bear by the GM who ushered Sir Prince (still cleaning) and Sir Slab for the pack’s appraisal.

Head Job enjoyed the run (and the sound of his own voice it would appear as he wouldn’t shut up) “long enough with the humidity, good markings” 7.8/10
Now Loved began quantifying the walk with “it was alright” then changed to “ very good” after a stern look from Sir Slab.
Truck Tyres liked the Dim Sims (it’s a good job as Sir Prince is contractually tied to his supplier until 2017)) “really good banana fritters” 9.2 awarded by the GM to keep the scoring unbiased.

Returners – Tweedle Dee and Tweedle Dum or Rug and Aussie as they are better known, both sporting healthy sized beer babies came out for a DD. Rug informed us of his international travels and Aussie confirmed a very similar itinerary with three days in Brunswick Heads. 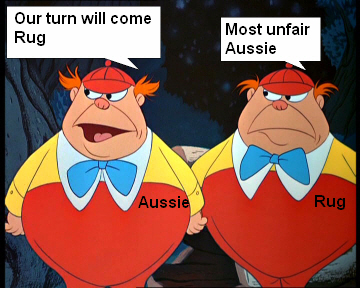 The GM was presented with a gift by Rug, a burka intended for those who insult
the prophet, promptly issued to Caustic for a feeble Islamic joke. Wow, it really
suited him. DD for Caustic and a few ventured looking like that he should be
placed on an indian bus.

RA took the circle and asked how Flasher’s jury duty went, apparently they told
him not to bother turning up, so he didn’t (that gives me an idea). Ferret given a
DD for an American comedian who put Ferrets name in the Bulletin?? Show Pony
a DD for another Bulletin story (does Circumference have a sponsor we don’t
know about?) Hard On, undecipherable at the best of times, recalled a cycling
story which made no sense until 25 questions later, net result a band-aid on the
elbow. Joke by Hard On, come back Iceman all is forgiven.

POW Botcho rightfully handed it over to Rug and Croc jointly for the beer
debarcle.

Upcoming events – Golf Day at Botcho’s 25ths Jan, for f%cks sake let him know if you are going for food, golf or both.

Next weeks run I missed, so look on the web page

DD for Pile Driver who Karma decided should take a fall for reconnoitering the
trail prior to the run.

End of Circle by Josephine.

Well done to the Sirs and helpers another enjoyable evening at Robina.

Rectum
Hang On a Sec
Don’t believe a word of it.

Play golf or just have lunch.

Book your seat at the table