Run Report 1914
NOT QUITE GOURMET PIZZA IN THE PARK MORE LIKE A TOUCH OF BEAR GRILLS A LA CARTE
As the tables and chairs were rolled out from the trailer and the new gas ring was fired up, much anticipation fell over the assembled 23 hashers on a cold night in the park on Chevron Island.

Walkers and runners were given their instructions and all headed west over the Chevron Island bridge with Lurch and Missing Link leading the charge. After a false trail, the runners rejoined the walkers where Miscarriage and Josephine had assumed leadership of that group. The trail proceeded behind the Greek Orthodox church where two Sirs struck up a conversation on grandfather duties.

Iceman had a quick snake’s hiss near the Australia Post distribution centre before leaping out of the bushes. As the trail headed south down Upton Street near the racecourse, Truck Tyres was distracted by the call of eyes left to have a quick perve at the girls sweating it out in the gym. With no checks or regroups , the pack soon dispersed in all directions and it was every hasher for himself as they made their way back along Bundall Road and right into Thomas Drive and home.

With no post run ginger beer to be seen , it was complimentary port for those who were quick enough. The hare could been seen cooking hot potato chips on the BBQ alongside some pretty enenemic looking sausages. The GM/a la Kitchen Bitch was seen examining the contents of a steaming pot which had a resemblance to some sort of soup. Upon closer examination it was determined there were some vegetables and other floaties which turned out to be dim sims.

Weekly and Woodsie remarked how professionally the breadsticks had been cut up. The blonde girls from the Boot Camp group who shared the park they with us remarked that it was flashest soup kitchen they had seen on the Gold Coast and didn’t realise there were so many health conscious homeless men on the GC but how come they all had flash cars ?
As the cold air kicked in, the hot chips were going down a treat until some hasher who shall remain nameless decided to pour not sprinkle salt all over them.

So by this stage, the boiling contents of the pot which the hare called minestrone soup were served up by the GM. The soup was quickly renamed mind strain soup. The next course was those pale sausages which by now had got a bit of a Pommy’s sun tan and fitted nicely into the sliced bread. The taste test lead Flasher  to enquire as whether they were Rosemary and Thyme. T

hey may have been but the hare was more guarded than KFC about the secret ingredients in his snags. By this stage of the evening the GM called for a circle in five minutes which caught most of the hashers off guard thinking more nosh would be coming first.

It would appear those seated near the trailer were treated to rissole burgers which consisted of nothing else. Botcho asked about tomatoes etc but was told that was it. Flasher asked about sauce and was told by the hare that it was not a requirement either as you don’t need it because – THIS IS REAL FRESH FOOD.

After the GM had suddenly called for the circle, Weekly, one of those hashers who missed out on rissole burgers , remarked how quickly the nosh had changed from previous weeks when he had stuffed himself so much that he was now going to the gym again.

Sir Blackie was asked for a run critique and told the GM – Never Again. Sir AH was asked for the nosh critique and he advised that the rissoles tasted like the sausages. After those comments no specific quantitative details for recording purposes were sought.

The GM then decreed that Pizza’s birthday run was now cancelled. The hare accepted his down down and the RA was invited to take over proceedings. As the RA had little material he called for charges.

Circumference called the GM out to see what his first reaction was to the word – brine. Circumference had seen a particular photo in the weekend newspaper of all the loved up couples socialising around Brisbane watering holes. The GM did not where this was going to until the photo of him and the devine Ms Brine at the opening of the Dutch Courage bar in Fortitude Valley refreshed his memory.

Who would have thought our GM on Monday nights is actually an A list member of the cocktail crowd on weekends. Sir Blackie in the absence of the Suns No 1 ticketholder, Aussie, called out Pizza for being a Collywobbles loser after their loss to the Suns in the AFL. Both nominees accepted their rewards graciously.

The RA’s evening’s awards went to Weekly and Woodsie. Weekly who is still going through the returning rehash orientation program got the Useless award as that was the only one he hadn’t received since returning to the fold. Woodsie was given POW as another returning hasher from a bygone era in the hope he will come back again for at least another week.

Botcho announced apologies from absent hashers -Carefree and Crocodile who hopefully will over their bouts of swine flu soon.
Sir AH announced that next week’s run will be at the tennis courts near the cemetery at Mudgeeraba and it would be a run to die for.

At 8:10 pm, the GM asked Ferret to close the circle. Several hashers were concerned about returning home at that hour on a Monday night not knowing what they might walk into at that time . So they considered telephoning first to make sure their partners routines on Monday nights would not be disturbed by their early sudden entrance home . Others considered which fast food outlet to visit on the way home to supplement the burgers they had missed out on.

Lurch and his band of hash logistics helpers soon had the table and chairs all cleaned up and repacked in the trailer. In a parting gesture , Pizza dropped off some gyprock for run setting by future hares.
This scribe was soon home and on the lounge while cuddling a nice little French piece, a Cote Mas 2012 Rouge Intense listening to four boring economists on the ABC’s Q&A program. Several hours latter he awoke to some other television program and still wondering about the evening’s activities but remembering that every Monday is a different route, so to speak.
On On
The Stig
Photo of GM is on page 29 of U magazine in Sunday Mail 06.07.2014
This week’s question – What does the GM have hanging from his shirt in the photo ? 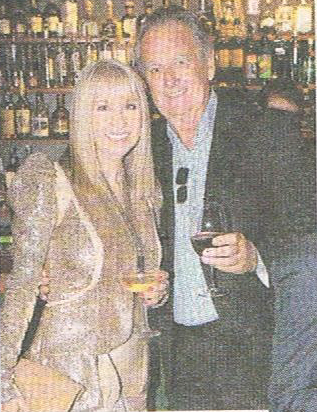