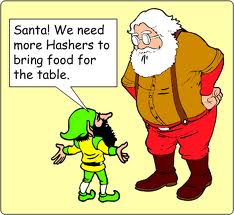 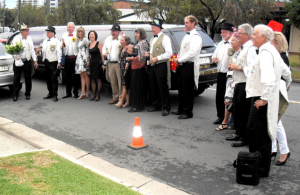 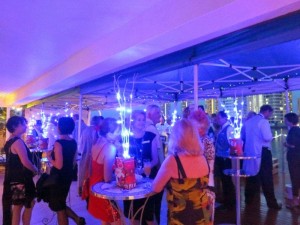 A special thanks to Weekly for arranging his son Bradley Pavarotti to sing on the night. With ex virgin Nasty as the Live Hare 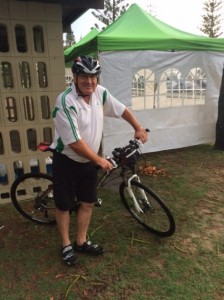 Promoted by the Virgins as a run in Virgin territory? Who are these virgins kidding!!.

34 excited athletes circled around the nervous hares as they issued the run instructions.

“Sorry but the drink stop with the promised entertaiment is also cancelled”.

Yes..a great start for these virgins ..a total Fu..k Up from the start.

Would this run even rate on the scale of recent hash runs ??

In the wash-up it was noted that there were only 13 runners following the Hare with 21 walkers ffollowing the GM of which 14 walkers ended in the broadbeach bar with GM and Sir Prince. 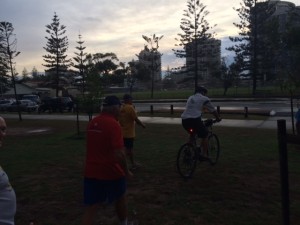 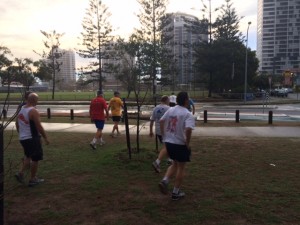 Tranny & Bondage had spent considerable effort in setting this well-marked Broadbeach run. Tranny advised that he would sweep the trail to prevent any hashers losing their way (can you believe that he could even think this). But he obviously knows the age of many of the hashers and this was a very considerate plan for this virgin territory trail!

The runners quickly settled in behind the hare bike and while the walkers went in the opposite direction towards the Boardbeach hotel.

First runners out behind the hare were Bent Banana, Rug , Circumference ,Fanny Charmer and Botcho.

It was good to see that Sir Slab had fully recovered from the severe accident on the trail last week and was running well. Josephine was seen looking for the checks that did not exist .

On On was then called several times on the run as the group all moved toward Pac Fair they were saved by Sir Black Stump with his assistance to get them going the right way. Truck Tyres and 2 Dogs soon became leading runners.

Some runners this week did most of the run and it was by all accounts an excellent run for the 2 virgins.

The run time was 35.65 minutes..Run distance 5.55 km.This all the information we have as 2 Dogs advised his GPS failed in the Pac Fair car park. However elevation could not be measured but it noted that it was the height of the escalator at Pac Fair.

Flasher with Two Dogs somehow managed to get back first again ..well done. Brewtus ,Lurch and Missing Link came in next in 37.9 min followed by and Truck Tyres and Fanny Charmer in 38.69.

It was reported that Jospehine ,Sir Black Stump, Circumference and Rug took the short cut and did not do the full run.

Run Critic Sir Slab “ The Hares put in a lot of effort and with no experience this was a great effort but again failed to provide a drink stop”. 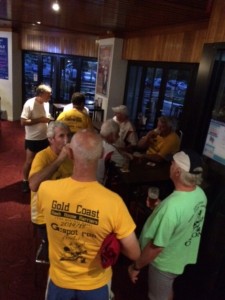 One of the biggest group of Walkers ever from GCHHH went in the opposite direction to the Runners.

The dedicated professional walkers led again by Grand Master and RA Caustic with Kwakka , FOS ,VD , Shat, Seedy , Swindler, Caustic, ,Sir AH all moving in one direction towards the Broadbeach Hotel for the proposed drink stop. They were very surprised to see that Sir Rabbit and Sir Prince were already there waiting for them.

The Grand Master made a GM decision due to lack of food and what was looking to become a complete debacle called the Circle Up Now instructions.

Immediatly Ex GM “feather duster” Now Loved was given a DD for talking over the top of the GM.

Shat was unable to control his excitement at getting his Christmas T shirt with heirachy photoes and immediately spilt red wine all over it..another DD

Then the food arrived.. 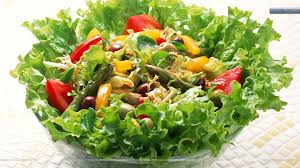 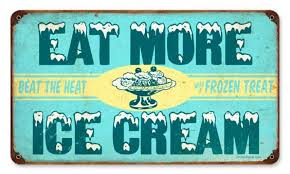 For the Hare Tranny and Nosh Chef Bondage it was always going to be a hard act to follow after the recent excellent efforts. Would these virgins be voted “The Best Nosh of the Year?”

It was unlimited help yourself food so many had second helpings as long as you got in quick.

Jospephine did comment that it was nice to find a potato in the Potato Bake.

Well done Bondage for using this secret recipe that has been tightly held in your family for many YEARS. You provided the meal with NO outsourcing…a Great effort that helped to make this ANOTHER REAL hash night of quality and true HASH nosh in AN excellent location. Cumsmoke who last week got the POW registered as the unhealthiest Hasher of the month at the Phantom blood pressure run decided to stay away this week for some reason ??. 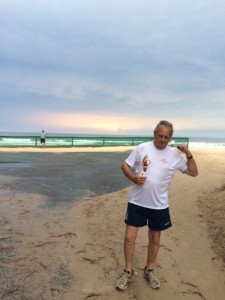 Yes .this is our GM enjoying the beach walk as he promises that this year it will be his goal “to get fit with great walks followed by Gourmet food that he will personally supervise.”

This week our GM walked all the way to the Broadbeach pub and back. Great effort GM

The GM had personally promised to assist the Virgins to ensure that this week’s run was not as predictable as suspected. Greta work GM to get the run back on track to erect the tent and lights. Another success!!!

Sir AH run week 22nd December not to be missed as Santa’s little helper will be there!!. Everyone to bring a $5 Xmas present 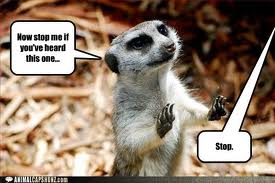