The Gold Coast Hash House Harriers are in turmoil!! Stand in On Secs strike wanting equal touring rights that the Hash Grand master has given to his Hierarchy mates.

One comment heard from a  disgruntled stand in On sec ..was ” Stop the tours GM or give us the same tour rights as you have given too your mates”

I can tell you that the rank and file are not happy.

More updates has they come to hand. 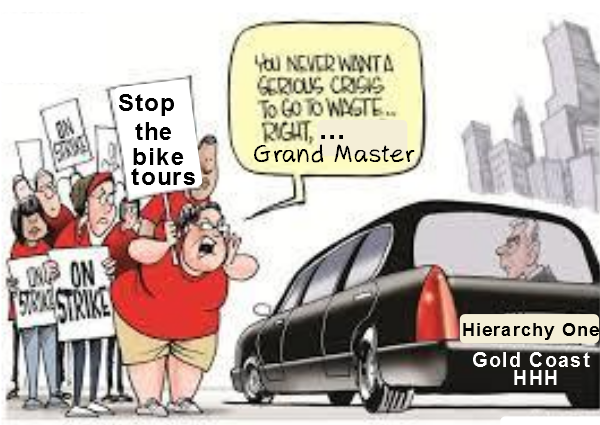 THE PENIS…MIGHTIER THAN THE SWORD!

It is an almost forgotten fact that when Hollywood legend Mae West whispered “Is that a pistol in your pocket or are you simply excited to see me?” she was indeed referring to a hidden weapon…one that was loaded, cocked and ready for crime. But, were it not for her glorious words and the dulcet, smokey tone with which they were uttered, a certain homicide was averted. And we, mere mortals, will remain ever so grateful for them and to her for whispering them…

And therein lies the secret for world peace.

When the pack returned to the esky last Monday night it was patently obvious that run 1952 had been a monumental cock-up. In the Circle, Sir Black Stump (SBS) best captured the mood when he described the run as: “The worst fuckin’ run in my 93 years of Hash running” He was just warming up: “This was shit with a capital S, crap with a capital C, junk with a capital J, garbage with a capital G. The Hares Rug and Fanny Charmer deserve to be iced for the entire coming week or preferably shot dead.”

Sir Black Stump was not yet done: “What really gives me the shits is not just this shit run but the fucking nosh that followed; this curry will give me the shits all day tomorrow. Fuck!”

Being ex-army and an advocate of the ancient philosophy: ‘Shoot first, ask questions later’, Sir Black Stump’s words were dynamite. So much so that when he concluded his commentary with “Fuck!” it was like he’d shouted “Fire!” at Rug’s and FC’s execution.

Still, the bombardment did not abate. Asked to comment on the nosh, (Not Tonight) Josephine said it was the worst curry he’d ever tasted. “The meat was all fat and grizzle and the sauce was just tasteless slops like they fed us during WW2. Incidently, talking of the war, that was the last time I had rice pudding…. who the fuck bothers making that shit anymore?”

Blue Card said that he concurred with Not Tonight (Josephine) adding: “The idea that expensive Aniseed liqueur might ‘save’ rice pudding is delusional. Nothing can ever save rice pud’”. Iceman agreed with BC and Miscarriage concurred with Iceman. It was unanimous. It was that kind of a night.

Thankfully Rug and FC averted the firing squad by promising to never setting a run in Broadbeach Waters again and to keep to Spanish recipes. A very enthusiastic rendition of the Hash Hymn followed:

‘They ought to be publicly pissed on

They ought to be publicly shot BANG! BANG! (sang with much gusto and pistol hand gestures)

They ought to be tied to a urinal

And left to wither and rot

Stand-in RA – Aussie – stepped into the cauldron and duly requested BallPoint “front and centre” on the dubious charge of “leaning on Rug’s brand new Merc.”

He’d barely settled back into position that Aussie recalled BallPoint to face the charge of “parking-in a gorgeous bikini babe who then asked me to help her move BP’s car which I did because I wanted to perv on her big tits and shapely arse.” After which Moonbeams was heard murmuring “End of Circle.”

Stand-in RA Aussie then told the Circle that: “I got a flat tyre last week and I strongly suspect that this bloke was responsible for it.” BallPoint was charged accordingly and given another Down. As he staggered back to his position and with Moonbeams words “End of Circle” still ringing in their ears, BP was called into the Circle once more, this time charged with “neglecting to control petrol sniffing in aboriginal communities, failing to implement the peace process in the Middle East and Kate Middleton”s new baby.” An angry Aussie continued: “Back in my day, society would not put up with the criminal antics of repeat offenders like BallPoint; the gallows is where they would end up in order to cleanse our suburbs of his type of scum……Thank you!” After which Moonbeams was heard screaming “For fuck’s sake, End of bloody Circle.”

With the intention to take the heat out of the boiling hot cauldron, Grand Master asked Flasher to present the ‘Useless’ shirt.

“There were oh so many candidates tonight GM” said Flasher, “some more deserving than others; the Hares were high on the ‘deserving’ list as was BallPoint but I’ve chosen to follow my heart this time and give this award to someone whom, I strongly believe, should have it in perpetuity. For having the cheek to call me a “garden gnome”, Truck Tyres you are fucking useless.”

To the raucous chorus of “We want the PoW, we want the PoW”, Grand Master implored Aussie to “pass on the Prick to a most deserving recipient” to which Aussie sheepishly replied: “My missus won’t give it back GM, I don’t know what to do.”

A seething Botcho finally erupted: “It’s not fucking good enough GM; for fucking weeks we’ve being hearing this bullshit about the PoW cumming back next week but every week it remains missing. It so happens that the PoW is also the highlight of my week and I’m fucked if I will put up with this any longer. Back in my days, if someone continually disregarded the wishes of the group, he would be strung up, hung and fucking quartered. That’s what Aussie deserves. Fuck him!” To which Ferret anxiously asked ”Is it ok for me to kiss him only?” and Moonbeams finally concluded with “End of Circle you bastards!!!”

p.s. An old Jacaranda Hash mate from my time running in Johannesburg wrote to me last week lamenting the fact that he’d been posted (by way of a dubious promotion) to Yemen as its latest Moroccan Ambassador. A pacifist by nature and a strong advocate of the adage that ‘The pen is… mightier than the sword’ Bodyguard (his Hash handle), described Yemen’s capital Saana as the “shithole of the world.” He went on: “The civil war here is as relentless as it is pointless, Shias hacking Sunnis and Sunnis butchering Shias. My mood is most somber, I feel so helpless so depressed… But last week a flash of light brightened my darkness: A new colleague arrived from Turkey whose business card tells me goes by the name of Mustapha Kunt.

Needless to say my dear BP we all, fighting Muslims included, feel like that now and again however very few of us would care to put it on our cards. But who could argue that peace here is not possible should the Sunnis and the Shias swap their weapons for one of them?”