Beside the Broadwater and under the Jubilee Bridge was the venue for this event. As hashers arrived they were greeted by Fuller Shit who was doing a demonstration with his drone of how you can perve on your neighbour’s missus/mistress when she goes for a late night pool summer swim in the nuddy.A great turn out of hashers has been a regular occurrence in recent weeks as no one wants to be forgotten when the new committee is announced. It is not uncommon now for hashers to get a tap on the shoulder on a Monday night and be asked if they have a tow bar or access to one. Fanny gave some brief instructions on the trail and to keep an eye out for some historic Southport building which he would ask hashers about upon returning. It wasn’t long before the trail left Brighton Parade and crossed over Ferry Road and from then on it was every hasher for himself to find their way home. The walkers did a similar trail and they too filed in in several groups from different directions. Back at the venue, hash security(those who skipped the exercise component of the evening) were already getting into the free $1 Asahi birthday beers supplied by Sir Two Dogs. As Miscarriage missed out on one of these beers, he was not a happy chappy after putting in the hard yards on the trail. In light of an award, now in the possession of this hasher, it might be an idea not to get caught again pilfering
the birthday beers before he gets one next time.
Due to the restaurant booking time for nosh, the RA moved things along and called circle time. The co-hares, Fanny Charmer and Fuck All’s first virgin effort were rewarded with down downs. Miscarriage described the run as dangerous with its many main road crossings. While on the topic of dangerous, Sir Prince Valiant, reminded Miscarriage about some of his occupational safety incidents with his operation of various pieces of earth moving machinery on his Gilston sub-division. It would appear that Miscarriage and his unfortunate neighbours are learning that DIY land clearing is nothing like DIY home renovations and maintenance which most can master these days after a shopping trip to Bunnings. VD seems to have got himself involved in some sort of bikie wars amongst the various hash cyclists over their colours and gang naming rights. The VLAD(Vulgar, Lowlife and Drunks) laws may be evoked as these groups are certainly larger than three and they have been seen gathering in public places like breakfast cafes and over long lunches so it may end up in the courts with a showdown over the names of the various gangs and these gangs legal representatives, Swindler and Fanny Charmer. The Qld police no doubt will be happy with this outcome as they can include it as another matter resolved in their fake statistics of crime cleaned up on the GC.
Nasty returned some lost property from his pie nosh evening and Jigsaw stepped forward to reclaim some sentimental property, a plate and fork from a wedding present cutlery set. A set of car keys was offered up and the hasher who never loses anything when travelling abroad claimed them. It was none other than Miscarriage who has lost just about everything humanly possible on his travels. More lost property resulted from the splinter lunch as a result of Missing Link having one of those red wine induced CRAFT afternoons. Nominees for the new Booze Masters were invited to show their interest. It was suggested that Flasher may be interested as he would be much stronger after his gym sessions and he could complete the other six months that he didn’t complete on this year’s committee. Caustic Crusader seemed to have an attack of verbal diarrhoea as he couldn’t shut up and with his multiple counts of circle abuse received multiple down downs. Miscarriage also was rewarded with a few drinks including the big one , POW, for his demolition of the neighbours fences while operating his earth moving machinery. Now Loved, the carry over POW, had assembled a good cast to choose from due to events that have recently occurred on previous Monday evenings. During his absence, he had gathered quite a bit of intel and had pretty good wrap sheets on most the nominees who had probably dodged a POW. Even those not in attendance were not left out as nominated look-alikes were called up as their proxys.
Sir Two Dogs was rewarded with a pretty ordinary rendition of Hashy Birthday before again, under duress, Sir Blackie, reluctantly was dragged kicking and screaming to close RPR 47.
Caustic gave us an update on Crocodile’s health while he is in hospital and all our thoughts are with him.
The proceedings then moved across to the nearby Sundale nosh venue with the French theme where you can buy some clothes while you wait for your meal. Weekly was under the pump from disgruntled hashers for purchasing a room temperature cask of white wine instead of a red one, however he performed some sort of miracle to make the green cask of white wine disappear and then in its place a red wine cask appeared. It didn’t take long for this one to disappear either, but this was due to the contents being drained by thirsty hashers washing down their meals of either flathead, chips and salad or spag boll. At least the meal sizes were nothing like traditional French fare, as the portions were generous.
With the early public holiday start, the evening finished before 9pm and at regular intervals , groups wandered off home from another good night of hashing.
Yours in hashing
CIRCUMFERENCE
Run Pictures 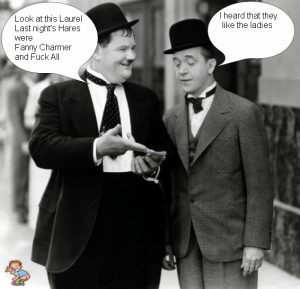