Hashers gathered in the car park next to Camelot Gourmet Pizza, fitting for the Gourmet Hash, in Bronberg Plaza, Benowa on Chinese New Year wearing whatever Chinese t-shirts and hats they could muster. Several tables had a Reserved sign on them ensuring they would not be taken while we were on the run. The Phantom called the group together and gave run instructions, and set them off in a southerly direction.

Runners lead the way through Bob Huth Park before realising it was a false trail. They turned west along Heeb Street then south on Scenic Avenue. The trail then went through Scenic Park to the edge of Clear Island Lake and followed the canal east to boat ramp, along Waterford Court, left onto Racecourse Drive, then left onto Heeb Street for the trek home. The walk was about half hour.

The Phantom set out a few platters with chips, dips and biscuits. Then came out aluminium baking containers with cheese, sausage, onion and dried tomato on a skewer. Josephine was impressed with the wooden skewers. We all knew that the Phantom would be trying to redeem himself from doing the worst nosh ever last year, but when another set of aluminium baking containers with cold rissoles came out, we thought this is it, not much better after all. We noticed a couple of unopened rolls of dog meat on the table as a reminder of a previous Phantom meal.

After we had all stuffed ourselves thinking that the meal was over, when about 15 slabs of pizza came out. If I had only known, I would have left the cold rissoles alone. Too late!! Dessert was packs of Tim Tams.

GM called the circle in the car park a bit away from the restaurant. Botcho and Fuller were sauntering in late, so were called in by the GM for delaying the start, and joined the Phantom with a drink. Ferrett gave a note.

Everyone thought the nosh was a great improvement on the last one. Pizza gave a note.

Visitor was Peter, son-in-law of the Phantom. Shat gave a note.

Miscarriage, Fanny, Hard On, Truckie and Fuller were called in for not wearing something Chinese. Botcho gave a note.

GM looked around for a Barnaby Joyce look-a-like and called in Miscarriage. Fanny gave a note.

Fanny was called in about those emails circulating canvassing for a committee position. Ice Man gave a note.

GM announced the car rally for the 17 March and reminded hashers to register for a great scenic drive and fun treasure hunt rally, followed by a secret overnight stop-over. Isn’t 17 March Paddy’s Night?

GM was about to call the RA, when he noticed Peter and the Phantom talking in the circle. They were called in for another down down. KB gave a note.

RA had only one misdemeanour, and called in the Phantom for having dental floss in one of the rissoles. The Phantom gladly took it back and had a down down.

RA continued with a few jokes, assisted by Sweat Hog about piss holes and arse holes, Poxy about elephant prick, Peter about a rabbit joke, Josephine a long joke.

Fanny stepped into give Miscarriage a book.

Miscarriage called in Sir Prince for bringing beer to the Sunday Show Pony remembrance lunch at the Thai House of Siam when he should have been buying beer, and Ball Point for drinking the forbidden beer. Link gave a note.

The Phantom called end of circle.

Remember to use [email protected] if you have a story for RA, and register for the Rally on 17 March, maybe an Irish Theme?

IMPORTANT: Have a skin check 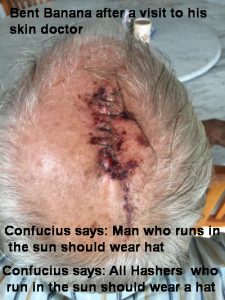