Caustic had just moved into this area, would he know all the tracks and trails in the area? We would soon find out. He was wearing thongs, was that an indication that he would not be running, or that there was no bush. Hashers gathered at the shelter at the Frascott Park in Varsity Lakes. Truckie had brought a couple of tables, much to the relief of KB, and some chairs. KB promptly started setting up for the preparation of the meal.

Caustic called hashers around and described the markings for the walkers and runners trails, then set everyone off in a northerly direction along Yodelay Street, then almost immediately left into the drainage reserve between the houses bringing us out onto Tracey Crescent, then north on Tracey Crescent almost to the end, then left into a small road leading to Reedy Creek. Left along the bank of the creek southwards behind the houses.  We got to the drain again where it emptied into Reedy Creek. We saw the chalk arrows indicating the trail was on the black water main. Mmmmmm.

Weekly and Fuller decided to try this crossing. Blue Card and I decided not to cross here but make our way back to Tracey Crescent then down the other side to rejoin the trail. We also didn’t want to see either Weekly or Fuller take a tumble into the creek. The trail continued along the bank of Reedy Creek, then into a bit of bush, before heading back into the streets.

Trail continued on the streets back to Caustic’s new home for the drinks stop. By the time GM and I got there, some of the hashers were already in the pool and having a refreshing beer. There were calls to make this the new APGU venue, with notions of frolicking on the carpet in the living room, with hashers watching through the large picture window. The trail back to the shelter was short. Did we pass Brewtus’ house? Are they now close neighbours?

KB was in his element, producing the gourmet of gourmet meals. Starter, consisted a ceviche with wahoo lemon set in a lettuce leaf, main was sliced ham and salad, followed by a tiramisu birthday cake for Caustic. All carefully crafted by KB, well done.

GM called Caustic and KB out, and gave Caustic an empty beer bottle with a prick shaped lolly to suck. He asked Caustic about the new shoes (thongs), but couldn’t have a drink out of them. GM noted that this was a new area for Brewtus also. Weekly enjoyed the walk, not sure about the water pipe, especially when he heard that Brewtus had wet the pipe to make it slippery. Brewtus joined the others with a down down. Weekly gave a note.

Returning runners were Phantom and Fuller, who were joined by Visitor Chicky Bay from Gladstone. Prince gave a note.

RA stepped in with a repeated joke, and was usurped by Circumference, Sweat Hog and Poxy with their jokes.

Back to the GM who called the POW, Bent Banana.

Brewtus got it for not calling ON ON on the run when he found trail.

Brewtus copped another down down for spilling paint in the back of his ute, and the roads halfway up to Brisbane.

Miscarriage called in Sweat Hog for looking like Barnaby Joyce.

Shat made Weekly happy by announcing that the Golf Trophy had been located in Brisbane. 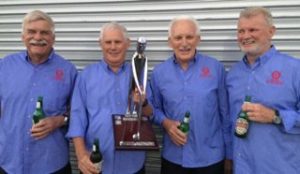 Hard On called end of circle.

Remember to use [email protected] if you have a story for RA, and register for the Rally on 17 March, maybe an Irish Theme?