Here are the HARD facts from the run – –

Xmas Eve and only a hard core of Hashmen were there, the ones with hardly anything better on Xmas Eve. For most,  it was too hard to break away from the season’s festivities, so a cohort of ten or so hardy Hashmen showed up. Our Supreme Leader, GM Weekly and his trusty assistant S Bends, the Dynamic Duo,  briefed us on the run, which he assured us being Xmas, would not be a hard run.
There was only one runner, Blacky, he headed off alone  and became a bit hard to see as he disappeared over the horizon .I walked with the  Supreme Leader Weekly and Slug,  (I always keep close to the GM in the hope of currying favours, but have hardly ever succeeded). We found the trail a bit hard to follow so we headed down Tedder where we passed bars full of hard core drinkers with hard faced chicks, spending their hard earned cash on expensive mojitos. It was not hard to see why they could not afford the deposit on the house
The run was all on hard surface bitumen, and we were instructed to yell out to Carefree as we passed his abode, for him to join us. However Carefree, being hard of hearing was waiting on the hard paved street and continued with us on to the yacht club.

From there on home a short walk back to the park was not hard to find, where S Bends had a variety of craft beers some hardly ever seen in bottle shops, including Newstead XPA, a delightful brew of 6.8% which he advises retails for $89 per carton, but he assured me was “cheap at that price” not hard to work out he is probably embezzling Hash funds with that mind set. Did Shat and Hardon have a few of these 6.8%’rs before venturing out home on the bikes?
Fullershit had his pride and joy, a brand new Mercedes camp van on display giving us a cook’s tour of the gizmos all very cleverly built in including a pop up roof with overhead bed, which would have been a bit hard to climb up to. Hard to know if he stayed the night at Main Beach as a test camp out.
As no RA there; Brengun related how ageing citizen Carefree going to last week’s Xmas run on the tram abused the Go card machine for being out of order until he discovered he was using his surf club card, case of hardening of the brain arteries.
The Supreme Leader called an end to the night and the mob dispersed with hardly a whimper.

( I found this report a bit hard to write) 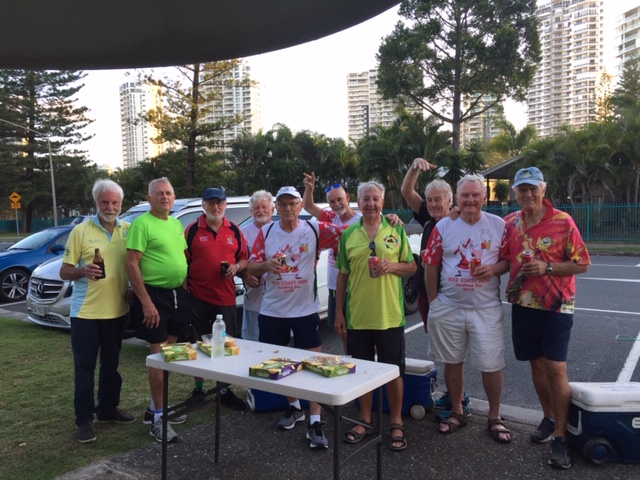