Heirachy: In memory of departed Hashmen 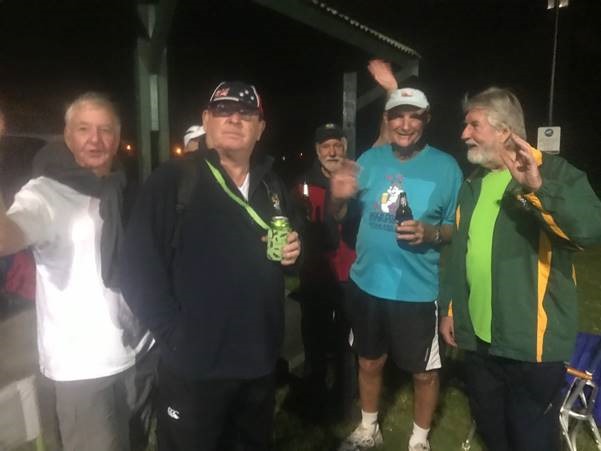 Notable Hashmen including those pictured gathered at Ashmore in a celebration of their mates who are now looking down on us from Hash Heaven. More of that later.

ARSENIC directed the runners one way and the walkers another as happened last week. Still not sure how that works. I took a stroll with the walkers minus SIR PRINCE VALIANT who was shamed last week by SWOLLEN COLON and re-joined the Runners. At first opportunity past GM WEEKLY and partner in crime WRONGWAY took what they considered the right way as we passed the start point. This was only minutes after they started! Where is SWOLLEN COLON to call out these scoundrels? The rest of us made a reasonable walk of it and stayed on Trail for sometime until we again saw the lights of home and succumbed to the pleasures that awaited. Back at base we found our new Boozemasters had constructed a Pop Up Private Bar for the exclusive use of their fellow Members complete with a wide choice of excellent beers and fine wines at unbeatable prices. They continue to excel!

SIR RABBIT was busy with a steaming pot of curry and also preparing a green salad. 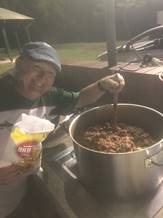 Slowly the pack returned – Runners in 55 minutes after 6km  and walkers in their own time and distance.

After pre-dinner drinks the Nosh was available with KB helping out and devoured with glee by the 35 hungry Runners with warnings by the Nosh Master to put their toilet paper in the refrigerator. My meal was excellent and similar comments came from around the tables.

A light shower came as GM ICEMAN called the Circle to order resulting in a sitting & standing Circle with all crammed into a small but dry space . The GM had a new set of robes and headgear from his wide collection and added class to the proceedings.

Walk Report by VD: Short! What was he saying? That is what all walkers crave!

Nosh Report by BOTCHO: Grand job, suggested all should email ARSENIC about something, and, back to the food, two of the pack, CIRCUMFERENCE and SBENDS had arranged Takeaway for their wives, grand children etc. SBENDS also pronounced it a great Vindaloo. No one argued his choice of names.

WEEKLY told us how to vote and SBENDS made a tear jerking presentation of silver tankards doubling as stubbie holders to the new Boozemasters. 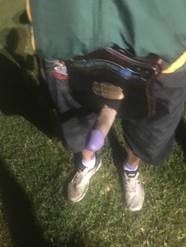 POW: SIR BLACK STUMP stepped forward and gave a long speech about times gone by and an old friend who he had slept with many times in many places. This turned out to be me and in  spite of my cries of Hierarchy exemption I was lumbered with the POW. Note that he had turned the POW purple!

SWINDLER reported that TRUCKIE now has a book on building retaining walls and can give advice on this if you need it.

New Member – Dave Geoghan was named READYMIX in a nod to his previous role as a concrete contractor that resulted in him now living in the biggest waterfront concrete house in Paradise Waters.

STD was sung a song in honour of his birthday during which SBENDS was talking.

Mention was made of the great job AUSSIE was doing on table cleaning. Yours for the year AUSSIE! 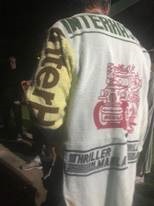 RA SPV took the stump resplendent in terry towel and honoured Hashmen past beginning with Sewage who left us on 15th May 1985, 34 years ago.

He told one poignant story of a past Hashman whose wife had arranged for his ashes to be scattered on a Run not knowing that he had died on the job with his girlfriend while on a fishing trip. And another of one who when the curtain closed at his cremation was heard over the PA saying ‘Shit its hot in here’ to the strains of ‘Baby light my fire’…..More stories this time next year.

The Circle was finally closed to a rousing rendition of our Hash Song sung from new laminated song sheets.

This image opens up in a popup window. To close this window please push the escape key on your keyboard.

In the late 1800s, the land which became the suburb of Ashmore was predominately owned by two pioneering families, the Muirs and the Smiths.

The suburb, located approximately seven kilometres west of Southport, takes its name from a farming property once owned by the Hicks family. The 300 acre farm created in the late 1800s, located near Benowa, was named after a property or place in England.

The farm, which ran sheep and cattle, also gave its name to a local thoroughfare, Ashmore Road, which connected Benowa to Nerang Road. The remaining five – six hectare portion of the farm, with nine cattle on the property, stayed in the Hicks family, beside the Ross Street and Ashmore Road intersection, for many years.

In the early 1970s, a Sydney property investor, Jim Donellon, saw potential in the area and purchased land for development. In the mid-1970s, when a housing estate with sewered land and underground power was being developed, it was given the name of Ashmore Village and the many of the streets named using words taken from Aboriginal language. By the late 1970s, Ashmore Plaza Shopping Centre was developed.

Later estates followed, including: Bellevue Park, Timbertops, Paradise River and Paradise Heights. As the area underwent steady growth in the following years, the name was adopted for the suburb, which was officially named and bounded in 1982.

By the mid-1980s, Ashmore was the home of many young families and boasted a TAFE, the Ashmore City Shopping Centre owned by the Rix family, a tavern, caravan park, day care centre, schools, the Domain Country Club, youth centre, a BMX track, skateboard bowl and ten pin bowling centre.

It was the first suburb on the Gold Coast to have road side bike paths and a roundabout. With such development underway, the Gold Coast Small Bore Rifle Club, which had used land in Ashmore for over 80 years, was required to close in 1985.

The suburb continued to grow with new residential developments, commercial ventures and the development of the Royal Pines resort.