This is the second attempt as the Mac just deleted everything. Apple is not everything its cracked up to be.

A depleted pack gathered at the venue (see why later) and were informed by the Hare – Moonbeams that an incentive of grog vouchers had been secreted onto the trail and could be redeemed at the eating establishment.

Consequently the pack left with some vigour and a degree of urgency, onto the track at the rear of the car park eventually coming to what looked like a definite dead-end in the middle of a canal, which is exactly what it was. Only the GM, RA and myself went full distance and received wet feet as a thank you. My discomfort was relieved somewhat as I heard Moonbeams fall off his bike (for the first time) Karma is a bitch.

We skirted the canal until crossing over at Enderley Avenue and then traversed the estates between Rio Vista and the water. Checks were a plenty, false trails unmarked and on arrows miles apart. Non-the less everything was run down in the search for the elusive vouchers.

The lead runners changed frequently as more people became lost and some gave up and headed home. Both Josephine and Sir Prince made a good front running appearance.

The three of us met up at the drink stop and indulged in a rather fine drop of tawny port (from a casket no less) served by mien host Carefree. We waited for a regroup, but with the exception of Swindler and Blue Card everyone else had either retired or missed the drinks stop entirely.

With Moonbeams in tow we all set off down TE Peters, over the bridge and on home up the highway.

After a small refreshment stop, we adjourned to the 1st Avenue tavern for nourishment.

Most opted for the daily ‘special’ – Beef stroganoff. For special read ‘ordinary’ and for Beef stroganoff read mushroom stroganoff with an onion chaser. Jenny Craig had obviously sponsored the meal. Those of us who had opted to go upmarket ended up with an adult sized portion with loads of chips (which were handed out to those who had chosen unwisely).

The circle was got underway by the GM who commented that the hare had been saved from an icing (over by 17 mins) due to the free beers. Caustic commented he had been unable to find the trail prompting the question “didn’t it go as far as the Darcy Arms?”

Rug gave the walk report – very lonely/dispute over checks/distance between arrows, which in turn led to a verbal dispute with Moonbeams

Croc interjected that Moonbeams was the first to complain that “we never go anywhere new” yet here we were back at Cascade Gardens. Once again Moonbeams took exception. The circle was becoming increasingly aggressive.

Kitchen Bitch asked how the hare was able to provide such food for the money, describing the non-existent entrée and desserts as delicious but mains lacking 4.5/10

Josephine as one of the three who actually completed the whole run scored it a 7.8/10 (strangely enough just less than his own run scored)

Returners – Phantom/Arse up both pissed off before the food, maybe they had eaten the special previously.

RA took to the floor and invited Kwakka (or Quaker if you were the waitress) to update us on his European tour. Kwakka name-dropped his whole itinerary before declaring the highlight as saying goodbye to Shat.

We were then treated to a trio of gynecologist’s jokes finishing with two from the RA. A self imposed DD ensued as the RA’s offerings were below par.

No POW (apparently too scared of Caustic) leaving Moonbeams to remark “but you used to be his Bum Boy” apparently the bro-mance is over.

Who would have thought that Nazi sympathizers would still be evident in 2012. Well its true, Sir Slab, Flasher, Shat and others (in future to be referred to as ‘the Turncoat Bastards’) left the exalted fold of our Monday Night Hash to attend a Nazi party up Brissy way. What some people will do to dress up. I have spoken with the party organizer Adolph von Layup, he informs me that as a result of the run Flasher will now be known as ‘Kurze Schneide’. This is German for short cutter.

The pack voiced its displeasure at the non-attendance. 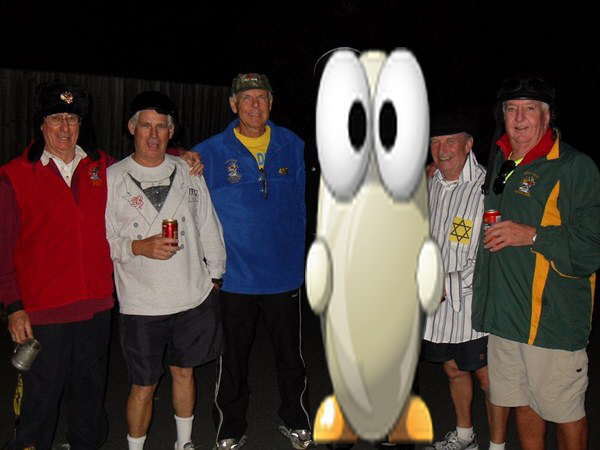 22nd August Red Dress run for the Cambodian kid at 6.30pm. Lets get some good numbers so we can show the wed/thurs hash tossers what running (and more importantly drinking) is all about. Oh and raise some money for charity.

A big hand to Moonbeams for a champion effort when he was a little under the weather.

On On and Sieg Heil

Rectum
On Sec
Most of the above may be untrue.