Speaking of Flasher – come back all is forgiven.

About 17 turned up in less than perfect weather. Not bad when you consider there are 16 away competing in the Tour de Philippines. Word coming down the wire is that Nasty has lost his phone on the bike ride but I have it on good authority his fellow riders are looking after it so he is not texting and riding at the same time.

We all gathered for drinks in Josephine’s garage but not content with the level of ambience  he decided to start a fire with what seemed like some old painted timber judging by the smoke billowing from the brazier. Not happy with the level of fire Josephine resorted to a container of kerosene and for a while it seemed like he was going to resemble a protesting monk with a serious case of self-immolation.

Eventually Sir Rabbit who was in charge of the Nosh turned up with his piece de resistance Tuna Mornay. As he had catered for 35 there was no requirement to portion control which was probably fortunate as the first course was non-existent.

The GM called up the circle and Hare Josephine was front and centre. Rectum declared  the run as a nice long run with a few hills but not well marked in the first half. Score 8.5

A second opinion from Veteran also scored an 8.5. An average of 8.5.

Rug gave an insightful opinion on the Tuna Mornay and said it was pretty good but it was a pity he didn’t have any rendering jobs at the moment as it would come in handy – score 8.

Rabbit was given a special mention, a high distinction and a DD for completing 20 half marathons and 40 years married.

Sir Cumference back from the Land of the Long Weekend told us the Kiwis have a saying….. what happens in the pen stays in the pen.

Next weeks run by Sir Cumference will be somewhere on the Gold Coast – to be advised.

That’s the week that was.

After being married for 40 years, I took a careful look at my wife one day and said …….”Forty years ago we had a cheap house, a junk car, slept on a sofa bed and watched a 10-inch black and white TV, but I got to sleep every night with a hot 23-year-old girl.

My wife is a very reasonable woman. She told me to go out and find a hot 23-year-old girl and she would make sure that I would once again be living in a cheap house, driving a junk car, sleeping on a sofa bed and watching a 10-inch black and white TV. 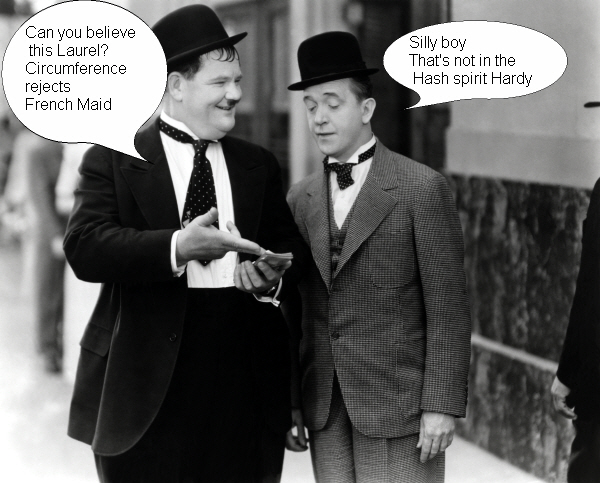