The GM Now Loved in a long run of attendance was again in charge of the circle. Nice to see the GM for several weeks in a row in Australia.

Two Dogs in an act of kindness scored the run as a 6.75. Shetland a long lost member thought it was a bit short but offered a score of 7. Miscarriage thought the run fantastic a worth a 9 but as it was only half the distance scored it. 4.5.

Caustic Crusader living up to his name said the Nosh was the best Jenny Craig meal he had seen. Nothing will drop the weight off quicker than a Mexican wrap containing an egg cup full of mince, a slice of tomato and a lettuce leaf. Bring back the hamburgers.

Rug a regular contributor at this point said “After 3 weeks of hamburgers I had forgotten what gourmet food tastes like”. Scored it a 9 out of 10 but as it was only a half size main course knocked it down to 4.5. Go figure.

Hard On copped a Down Down for a pair of new shoes. Wimped out on the traditional drink from the shoe and took it like a girl.

Returners: Miscarriage been to Japan on a pilgrimage and Old Fart who has been MIA forever has been playing basketball.

Circumference was found guilty of a big win at the Melbourne Cup while Sir Rabbit after receiving divine intervention while sitting on the “John” failed to follow through and almost had a boxed trifecta worth $1300.

Rug was exposed as a recent returner from Jakarta as special envoy from ASIO sorting out the current diplomatic row.

The POW “paraphernalia” was absent but this week’s awardee Cumsmoke still took the traditional drink.

CAUSTICS JOKE OF THE WEEK 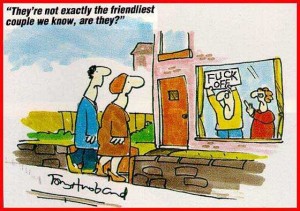