It was not the hounds this week who appeared anxious before the Run, but co hare VD who after backing in the trailer rather late, was busy counting numbers. Very seriously counting and fearing that there may not be enough food. As it later turned out there was enough; just enough, with no seconds, thanks to capable portion control.

Following the briefest of instruction the pack headed east through the tall trees of Pizzey Park where they quickly seemed to get off trail, near the football oval.  Following a forced regroup the pack then headed south and out of the park.

Not long and we came across the first split (Slug’s excuse for a check) which caught a few on the false trail. The real trail led along some tarmac then down into a large opening off Beaconsfield Drive where another split had the pack running in 4 directions. Rectum left, Botcho west, Bent Banana south west and south was Miscarriage slowly disappearing in to darkness, with faint cries of “ooon” “ ooon” heard in the distance.

Up until now Truckie was among  the FRBs , but it was revealed later that he parked near the football oval and observed parts of the trail before the run began. Shame! Or maybe just a lucky bastard.

After several more splits the pack closed and it was then along  Anthony Drive and up some steps into the bush, at the end of which the markings were Walkers left, Runners right. It was here that our disbanded candidate for GM Caustic Crusader disgraced himself, by setting a very poor example to fellow hashers and running (actually racing was reported) home along the Walkers trail. Wank wank.

The runners continued down  Bardon Avenue where the pack again split into several groups. With some additional loops we finally arrived at Paradise Ave after a good workout. This lead into the Pizzey Park east entrance. Some well marked large flour arrows guided us through some grassy patches, then around the lake and home.

At the end it was Tootzie having a Miscarriage out of his Rectum. These 3 were the first back, but not necessarily in that order. They were back in just over 40 mins, with all back within the hour. A great run.

The GM called everybody up for the usual circle that was shaped like nothing any mathematician could recogonise.

First out was the Hare, or should I say the Hares with VD responsible for the Nosh and always travelling Hashman Slug setting the run. The most notable thing of the run was that Flasher perhaps for the first time in his Hash career did ALL the run. This was personally verified by Botcho that there was no shortcutting and he did the whole run. Flasher was uncharacteristically complimentary of the run and said there were good markings and said it was a good run 7.938.

Flasher was then presented with a special Hash medal made of 18ct gold for his 100% completion of the 1901 run. Bent Banana chiming in for a second opinion gave the run a 7.5. The GM in his normal demonstration of mathematical prowess said that would be an average of 7.73. When asked which school he went to the GM said I loved school, Grade 1 was the best 3 years of my life.

Rug our resident master Nosh critic said the carrots were good, especially with the touch of rosemary and was a change not to have a crunchy al-dente vegetable. Great potato au gratin, just brilliant and he gave it a 8.9. Truck Tyres called in as a first reserve judge gave it an 8.5 and GM once again demonstrating his mastery of pure maths and science said that would average at 8.26.

Aussie was celebrating a birthday and apparently had donated a few crownies but despite this scribe searching in every ice bucket he could not find a free crownie or a free crownie for $1. So Aussie, nice thought but I still ended up with the Pure Blonde beer.

Botcho, Bent Banana and Rock Hard were give the ‘Clowns of the Week’ award as apparently at the weekend they joined up for a little Sunday run at Burleigh Heads and every time a nubile young maiden walked past their heads turned with their mouths open like three clowns in sideshow alley.

Our visitor Toots was given a drink as a stand in for that other Italian, Pizza as it would appear Pizza at the 1900 run destroyed the image of our club as a posh Hash with the Botcho family.

Next the RA jumped in the centre of the circle like a coiled spring and still apparently striking a raw nerve was his debate with Circumference last week as to the justification of the accusation against Circumference of stealing somebodys drink.

Just to prove who gets the last word, Circumference was called out again for jumping to the front of the food queue and jeopardising portion control so that those at the end of the queue were wondering if they would get fed. Circumference not taking things lying down once again argued with the RA. I think ensuring that we have not heard the end of this story.

The RA said the #2 rule in Hash is that when you are up to your eyes in shit, shutup. The # 1 rule however is known widely and he proceeded to demonstrate. One of the Hash chairs had been broken into a crumbled almost unrecognisable mess. He then said “ I ask myself who f*#ked this chair?” immediately one name came to mind, Lurch. Lurch said not me, my best mate Toots. They both came out and took a drink to settle the matter.

. Sir Prince came out looking a bit sheepish but said the princess had sent along a special gift for the RA plumber which consisted of a special brand of beer she had bought back from China which had a picture of a large rooster on the side and it had the name Big Cock beer. 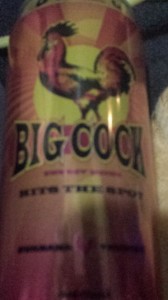 Sir Prince has been downing it for 3 weeks with none of the desired results.  VD was reprimanded for parking the trailer in a handicapped space for the duration of the Hash risking a parking ticket for the Hash at 9pm. Absolutely no respect for the handicapped among us including half the walkers in the Hash.

The ‘Kind and Considerate Husband’ award went to Hard On who had asked his wife would she like to go out to dinner on Monday night, maybe have a drink or two and relax with a bit of a flutter on the pokies. When she said that would be nice darling, he said “great, could you drop me off to the Hash on the way to the casino”.

Our well known Hashers Phantom who has been missing for a while was given the ‘Father of the Year Award’ as he was only prepared to accompany his son, who works for an airline, if he could get complimentary business class tickets. No way was he flying anything less that business class even if it was free.

The POW safely in the hands of Rectum for several weeks had a huge number of potential candidates with Rectum calling out about 12 potentials from the circle. This was slowly and methodically reduced down to the last 3 men standing, all upstanding members of the heirarchy.

However, after much individual condemnation of each of the three, the POW was aimed into the crowd and it anointed none other than our esteemed GM as being the person totally responsible for us getting no free shirt for the 1900 run and no free dinner for the 1900 run. The GM who could have pulled rank and invoked the no POW to the heirachy manned up and took one for the team.

Returners this week were Phantom who has been down to Geelong giving the football team some secret training and Truck Tires who has been to China, visited the Great Wall and asked the guide how many bricks were in the wall and where could he buy some yak soup.

A sad report that Josephine had lost the end of one finger in an accident repairing the brake shoes on his car. There was much discussion as to which finger was damaged and what repercussions were for his person life, it may be the finger that one counts the money with.

The Anzac Day ride will be on Anzac Day. Really!! 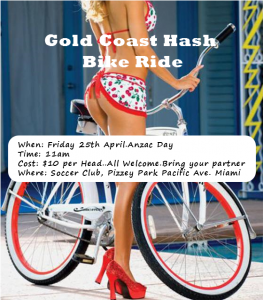 In the absence of any appropriate person to close the meeting it was done on the call of the GM by all present “END OF CIRLCE”.

Take your time and see if you can read each line aloud without a mistake.

The average person over 40 years of age cannot do it!

Now go back and read the third word
In each line from the top down.