Welcome to my Nightmare….

It was late in the day when I called in to Brian’s place on my way home from work.
-“He’s not back from the doctor’s yet” said his wife with concern in her voice, “he’s been there all afternoon.”
So I called him:
-“G’day mate howzit hangin’? Where the fuck are yuh?”
-“Who is this? said a voice I did not know.
-“BallPoint, who’d yuh think it is? Why, who’s this?
-“Senior Serjeant Campbell from Surfers Paradise Police. Who are you?”
-“I’m a friend of Brian’s, I’m here at his place with his wife wondering where he is.”
-“Wait there, we’re coming over.” And he hung up.
They were at the door a few minutes later:
-“I’m sorry to bring this sorry news” said the serjeant, “Brian has passed away. He collapsed in the doctor’s waiting room and nothing they did could bring him back. I’m very sorry.”
Brian……….my best mate of 35 years……..gone………..for ever!

In the preceding days, emails were flying around that a legend of the Gold Coast hashing community was in serious trouble; the Big C had got a hold of Ringbark’s prostate and just wouldn’t let go….
A veteran of 135 Gourmet Hash runs, Ringbark was a hardened hash man with a quality pedigree. A knockabout bloke with a glint in the eye and a nose for the punt, he had a particular penchant for any get-rich-quick-schemes; from Peter Foster’s thinning teas to Nigerian Princes looking to offload their millions into his bank account, Ringbark entertained them all. Scammers, conmen and bullshit artists were welcome to his imagination…..
He fought bravely so many battles but in the end he lost the war and left us to try his luck in Hash Heaven.

The evening news led with the death of Australia’s 21st Prime Minister, Gough Whitlam. At the spritely ripe age of 98, Gough fell off the twig as he muttered: “Well may we say God save the Queen, because nothing will save me anymore….”
A man not short on confidence and the sense of occasion, Gough’s legacy is enormous. His was not the evolutionary route but the revolutionary one. He radically re-shaped Australia from a country with entrepreunerial zeal to one big fat welfare state and the bloated bureaucracy needed to manage it. True to his ideological roots, Whitlam was the first Western leader to get into bed with communist China. And when the shit finally hit the fan on his reformist agenda, he thought nothing of employing the services of a Pakistani crook to bail him out.

It was a moonless night. The Hare Botcho was most pertinent when giving his final instructions:
-“Don’t forget your bloody torch. And for Fuck’s sake keep together; it’s bloody dark in there and if you get lost you’re on your own. No one’s coming to get you. And good luck!!!
There was tension in the air as 6 of us ventured into the shadowless scrub. It would be Sir Black Stump who’d break the tension with a cry of “Oh fuck!!!” as he trod on a massive cane toad blocking the narrow path. At the first check point newly named Brewtus spoke up in a trembling whisper:
-“Fuck me it’s dark in here………no way I’m goin’ checkin’….I’m hangin’ around here until it’s found.”
As it was, I found the on trail and waited for the pack to catch up. Deeper into the spooky forest we soldiered on; As the front man, and with my torch pointing downwards, I copped all of the spider webs and any low hanging branches. Checkpoints 2 and 3 were negotiated without any dramas but the pack began to disintegrate. Still heading the pack, I was suddenly stunned by the apparition of a ghost, with a porcelaine white ‘the scream’ face and the ubiquitous woo woo howling. I jumped out of its way and sought refuge in the bushy undergrowth but as I did I fell headlong into a ditch. “Get away from me” I yelled as I scrambled to my feet and raced back onto the path in terror. As a last resort I started screaming “on, on……….on, on” with renewed gusto and in a desparate bid to ward off the surrounding evil spirits.

Suddenly I came to a fence………. a high mesh fence……….I was trapped, a prisonner of this God forsaken, spooky forest. As I pointed my torch along the fence line I began to crawl along it. Far away I could hear a low rumbling noise which seemed to be nearing. Then I found it….a hole in the mesh and I squeezed my bulky body through it. I was free!!!! The rumbling noise was getting louder, hopefully I would be rescued. I started climbing the steep rocky embankment and as I looked up I thought I caught a glimpse of light. I scrambled up the slippery ravine wall, the light was getting stronger, the noise was getting louder. Then I was there…at the top….and as I emerged from the abyss I was blinded by the most intense light and overwhelmed by a thunderous noise. And as the speeding train passed me by, a gust of hot air hit me with such force that it knocked me backwards and I slipped back down that black ravine once more. I screamed “help, help” but there was no response, only an eerie silence, but for terrifying bush sounds. I found the fence again and soon I crawled through its gash once more. Furious panic gripped me and I raced up the slope before me, bush bashing my way to God knows where. Eventually I cut the trail and soon I was relieved to be back on flour. As my confidence returned I noted that there were no spider webs across the path concluding that others had been there not long before me….and that I was on my way ‘Home’.

‘Home’, on this terrifying night, was an old, long disused tunnel; one probably inhabited by Goths in times gone by. On this night it was illuminated by a dim bluey light and, as I approached with trepidation, I found a bunch of zombies, witches, freaks, devils, vampires and death cultists. Uncle Fester was also there presiding over a very old and dusty coffin…….a most frightening prospect.

They seemed to be enjoying themselves, drinking and eating with gay abandon. Much of what was discussed didn’t make any sense to me but they left me to do my own thing.

Eventually, one of them with a particular ‘presence’, a strange ‘staff’ and an even stranger hat, rallied them into a circle formation around him. He called in a devil who had been responsible for something called ‘the run’ and after much toing and froing, the devil drank some potion from a large metallic goblet.
A zombie appeared in the circle and he too was given some of the potion for his commentary on ‘the walk’…..
Then a freak appeared and he was given a statue, shaped like a phallus, for being a ‘cheap’…..
Hannibal Lecter was given some potion for his audacious attempt to lure two dames into the tunnel to have his evil way with them.

All of a sudden fear gripped me once again as the black ghost of the forest made another appearance, ordering Godzilla into the circle and giving him a goblet of potion for his inspired idea of bringing ‘Home’ a coffin. Godzilla then explained that the coffin was neccessary to “carry the carcass of the ‘one’ being sacrificed tonight”……

On that terrifying note, I reached for my hash bag and charged for exit.

ON2,
Acting On Sec 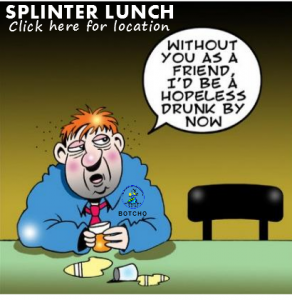