Well, here we were again at an old favourite spot at the pony club at the end of Wandin Street, Nerang for Ballpoint’s birthday run…50 years old and he doesn’t look a bloody day over sixty…must be all the hashing in exotic locales all over the world..it obviously takes it out of you…happy birthday you old prick!!

About thirty intrepid hashers turned up for the run, a lot of them probably wondering what the hell was ahead of them and why they had to pay $20 for the run instead of the usual $15….of course all would be revealed later, as we would all see!…and why the hell did we all have to wear Hawaiian shirts we wondered!

Some research on Ballpoint’s birthday, assuming he is to be believed that it was four days before tonight’s run only turned up one “famous” person with whom he shares a birthday…Mary, crown princess of Denmark…another Tasmanian!! Good one Ballpoint..hashy birthday, f*** you!!

The hare greeted us all upon arrival with a big backpack strapped to his chest…shit! Has he lost all his marbles and is he packed with explosives and this is not going to be a hash run but terrorist training instead???…and was the extra money to pay for the explosives??? No, no, we were reassured by Ballpoint that this was going to be a Hawaii 5-O theme run…”out there in the bush, you blokes have to act like it’s full of thieves and crims…you have to be on your toes…you have to find the trail…it’s going to be marked with shredded paper and I’m going to head out and mark it now and you blokes follow in ten minutes”.

Off set the hare into the wilderness and after waiting the requisite time we all set off in the same direction, including the walkers. After about twenty five metres we came across the first shiggy…a bloody muddy creek crossing…great stuff Ballpoint!…soggy feet for the next four kilometre trek!…soon after that there was a check consisting of a large mound of shredded paper…no way could that lot have been in his back pack…this was all a pre-planned trap!

Runners shot off in all directions and it looked like there was no trail to follow but after many cries of “are you?” and “checking!” after what seemed like an eternity, a faint cry of “on on” in the distance raised hopes again. “Bugger it” said Botcho “I would have been happy to turn back and crack a beer!”…a sentiment with which a fair number of us agreed. This scenario was to be repeated at every single check …..”what the fuck is he trying to do to us?”…”bloody prick!”…..ahh the joys of hashing!

Ballpoint must be given credit for one thing though…the runners all stayed together for the whole run…..probably because everybody was shit scared of being left out in the wilderness on their own…..even Flasher did his best to resist the temptation of darting off on his own as he normally does. Towards the end of the run most of us were desperately lost and thank goodness a friendly local came out of her house backing the bushland and said “are you blokes lost??” to which we all replied “yes…how the f*** do we get back to the pony club?” to which she responded “just go down the hill there and there’s a creek crossing (great! Another one!) and you’re nearly there”…off we went down the hill, fortuitously finding the trail again and there we were…back at the start..brilliant! Despite all the protestations and abuse directed at the hare, we all summed it up as a bloody good run!

Ballpoint made a bloody good effort to upstage Sir Blackstump by pinching his signature dish, spaghetti Bolognese…all agreed that it was a good feed, with the nibbles at the beginning being a slightly spicy Spanish-style chorizo, served with cheese and that old favourite, Jatz crackers. Where would we be without Jatz!! Dessert was Crepe Suzettes, probably outsourced to Ballpoint’s lovely Mauritian missus, oh, but hang on, he’s French…he’s got the right DNA to cook that sort of shit so he probably did them….good job Ballpoint..tres bien mon ami!! There was a second dessert, boob-shaped cakes topped with cream..shared by those not on the point of bursting after circle ended. In all, we all agreed it was a great feed and who gives a shit what Blackstump thought of it!!

Circle and other crap:

In keeping with the Hawaii 5-O theme, Ballpoint had arranged for one of his copper chums to come and provide us with some light entertainment…Constable Crissy certainly kept us all in line, not hesitating to wield her extendable nightstick to keep our behaviour in line. Enough said…you had to be there to appreciate it and if you weren’t or if you are reading this as an interested outside, well ha! Ha!…you missed out..tough titties J!!

Our esteemed GM had some issues tonight keeping the crowd under control, probably to do with the fact that he seems like a man under the spell of our uniformed guest…can somebody please tell him that drooling is not acceptable, even amongst a crowd of misfits such as we are! The highlight of circle tonight was the celebration of Ballpoint’s birthday…no details but he certainly got his twenty bucks’ worth tonight!!!

A total lack of imagination was shown by Fullershit in passing the Prick of the Week over to Nasty for no other reason that the poor bastard is called “Nasty”!! Lame, lame reason Mr Fullershit and again probably the result of being distracted by a couple of the fine “points” raised tonight JJ!!!

About half an hour into the circle proceedings, Moonbeams and Showpony started to whinge, bleating about it being past their bedtime…Moonbeams was heard to say “this is shit…my arse is getting sore…seen one pair you’ve seen them all “ (I wonder what he means??…does he mean a pair of guys up there getting “down-downs”??). Showpony agreed with him and said “yeah, fuck this, I’ve got to go home and worry about my sixth separation!!” (huh, is that six degrees of separation?).

Enough crap for now…that will do for a run report…don’t like it??? DILLIGAF!! 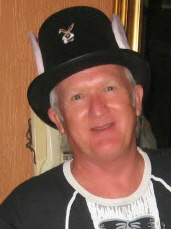 Sir Rabbit was out and about  last weekend and recorded this video for your viewing pleasure. He reckons that our Grand Master needs singing lessons  LOL!!