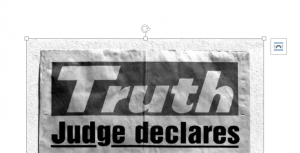 Congratulations from the GCHHH for an amazing effort.

The Start of the Run 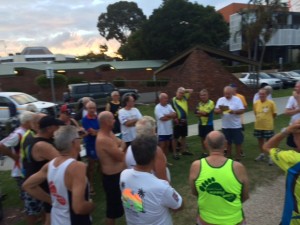 38 excited TriHashalonites gathered around Van Diemen (VD) who had just flown in from Tasmania especially to control and organise this ground-breaking event. Thanks VD for making this special effort.

VD then went into the very detailed run instructions. However Shat decided to get telephone advice from his good friends at the Australian Institute of Sport to assist VD.

VD then appointed his team of professional and very unfit Marshalls of Acting GM Caustic (foot in plaster) , 2 Dogs (weak legs) ,Truckie ( not well) to monitor the teams.

With the excited repetitive sounds of let’s go!!! The swimmers headed towards the lake at full speed as the remaining team members of the 11 team cheered them on. 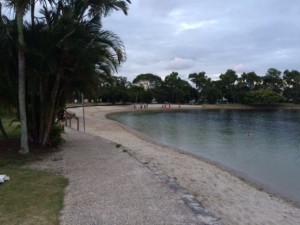 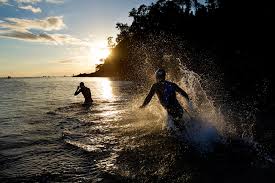 Yes. you guessed. A total debacle with a series of unplanned events guaranteed to create havoc amongst this fine group of swimmers as no one was really sure which side of the buoy to swim around, no lifeguards or back up emergency measures to help save Fanny Charmer from the events that was to rapidly unfold. 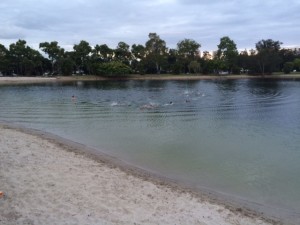 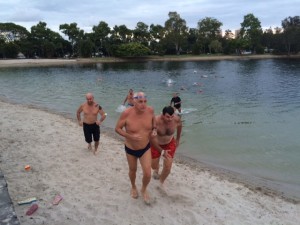 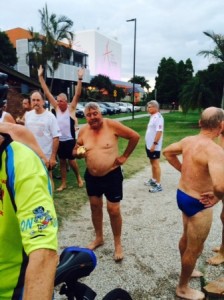 The group of weak kneed, breath gulping and panting swimmers were greeted by Acting GM Caustic who had prepared a nice Cold Aldi meat pie for each swimmer to eat before their next team member could commence the next leg of the bike ride.

Pile Driver, one of the early swim arrivals found eating the meat pie between gulping big deep breaths of air a little daunting!

Then out went the 11 Warriors one by one. These finely tuned bike riders have been training 3 times a week for this last 12 months for this event. Phantom, Rockhard, Jigsaw, Nasty, Kwakka, Shat, Blue Card, Fanny Charmer, Sir Slab, Swindler and Seedy. What a fine bunch of highly tuned athletes. 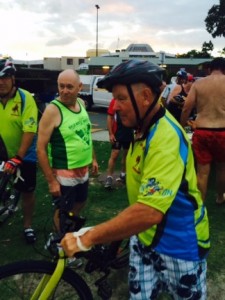 It does seem that several bike riders took short cuts and were unable to see the correct trail!! Kwakka, Blue Card and Hard-on were disqualified by the judges Aussie and 2 Dogs and Truckie for short cutting. Lack of detailed instructions resulted in a total run Fu###@@ up. Some went around the run circuit once like Sir Rabbit, some twice like Ballpoint, some 3 times like Bent Banana and Miscarriage and while Flasher never sure of where he is went around 3.5 times.

Absolutely no idea except we did see Cumsmoke collapsed on the ground complaining he needed to work tomorrow!! 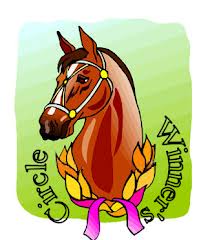 Of the 11 teams each one claimed to be the winner. I guess they all were as they competed but as always only one true winning team!!

Computer driven results produced by 2 Dogs (without his computer …figure that out!!) gave the winning team advice to VD. 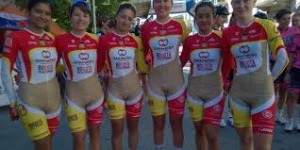 The queue for the Finisher T Shirt quickly grew as the Finishers were eager to collect their FREE Collector’s Item memorable T Shirt. All agreed it was a fantastic design (great design work by VD) with the hierarchy photos and was a wonderful memento of this event. Bring your own tin. The result looked and tasted nothing like the photos below.

Rated the WORST Nosh of the year to date. The leading hash food connoisseur on Irish Stew, Rug ….absolute Crap and the recent hash of Nasty’s Aldi Pies and peas were much better!!!

Blue Card as always living in another world agreed with the Sir Rabbit and declared…. Excellent Food

Well done Missing Link for your great effort but the ingredients supplied to you were obviously not so good.

Food comments and Score of -Minus1 officially endorsed by the Rug says it all!!!

Where is the GM when he is most needed!!

The excited teams circled around the Acting GM Caustic in anticipation of a pending announcement. It was suggested that there may be a readjustment of the team positions.

No such luck for the Winning Team as Acting GM Caustic immediately gave orders the Booze Masters to prepare DD for the winners as their first prize.

Returning Runners then got a DD Awarded by Nasty to Jigsaw for running Nasty off the bike track and causing injury to his leg.

At 8.58 after much laughter & frivolity it was the those familiar words of Josephine that’s echoed over the teams ………      End of CIRCLE