The Annual Hash Relay is on our door step this year. Truck Tyres and your Hierarchy needs numbers for our team!!

About The Hash Relay

At just after 6.15 the GM called the rabble to order and the Hare Rockhard gave the run briefing; on chalk (And its raining yeh right !) and the walkers follow the chalk but if there isn’t any chalk “keep walking” and the you will cross the runners trail but “keep walking” and if you see trail marks in the wrong direction just “keep walking” til you get back here ! Circumference was heard to say “why is it that the longer you are in Hash the harder it is to understand the Hare’s briefings” ? One of the conundrums of the day !

Anyway, off went the pack, rugged up in thick waterproof jackets  against the wind, rain and wet conditions, and headed off towards Mudgeeraba Village centre thru to the Caltex overpass thru Robina via Laver drive then under the underpass and back thru the “shiggy” ; approx. 8.3 kms for the Runners but most walkers ignored the Hare’s briefing and got lost at the Mudgeeraba roundabout when the trail ran out and then came home!

Moonbeams, Weekly and the Stand-In Scribe took the decision to have a motorised run but ran out of petrol at the Woodchoppers Inn; how convenient as the warm wood fire and delicious cold beer was a welcome waiting spot whilst we awaited the RACQ ! Or something like that !!

We arrived back at the venue to see the Hare getting ever increasingly “frazzled” as the Nosh was ready but the pack had not returned in full; Never leave a man behind !!! that was until Rockhard delivered to the concrete stoop of the Mudgeeraba Music Hall the “Penne bolognaise” and baguettes (with protective rain film); the Pack descended, like the rabid dogs they are, on the warm sustenance with nary a glance at the late arrivals! FX#K them (munch munch) slow karnts (munch munch) is there enough for 2nds (munch munch) yeh dig in mate (munch munch).

Late arrival Link (soaking wet, dirty and cold ) looking, like “Oliver” with his bowl extended, got a few measly scraps and then ( I will always be haunted by the sight !) SPV manfully acquired the slops pot and with the last few bits of stale bread left by the Pack wiped the pot clean; Rockhard was heard to say “at least I wont have to wash that pot” !!

** Late information has come to hand that the Hare had another pot of Nosh on the stove at home !!!! These reserves were reserved ?

Dessert was “on special” offer from Aldi with a choice of canned peaches or mixed fruit with “out of date” Neopolitan ice-cream ! HMMMMM Gourmet Hash ???

The “Standing” Nosh (as there were no chairs or tables) on the concrete stoop was accompanied by a drum cacophony (A drum cacophony is a drum symphony created and played by a drug crazed Deaf Society); drum practice finished at 8:10 and turned the lights off during circle (More on the circle later)

Rockhard was called out and Flasher gave the run report using his new pink “toy” watch (A xmas gift to his wife) to support his claim he hadn’t short-cutted; on trail was his claim but we ALL know the truth Flasher ??!!

Bent Banana gave it a good but long run in the conditions with long distances between chalk marks; in conclusion he determined it was too F#XKing wet and too F#Xking long !

Walkers report was the usual confused senile dribble of being on trail, til they lost trail, and so they reversed trail, and somehow found their way home !!

As reported earlier at this juncture the punctured eardrums were mercifully saved when drum practise stopped and the lights went out ! End of Circle ???? Noooooooooooooooooooooo !! But wait there’s more ?!!

In support of the photographic evidence from yours truly the Stand-In Scribe describing the drunken exploits of Headjob & Swallow (his missus) at his birthday party at the Curry Muncher this was followed by SPV complaining that they then had a birthday party on Sat night just down the street from him which finished only after the 3rd attendance by the police; SPV is very worried that house prices may fall as the neighbourhood is in decline since the Welsh git and his soap dodging Pommie wife have moved into the area!!

Hash Investigators made further inquiries and the drunken party in question may have been “next door” !!?? The Jury is OUT !

I think it had something to do with the drunkin fiasco outside their restaurant last night…!!!! 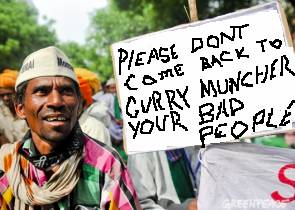 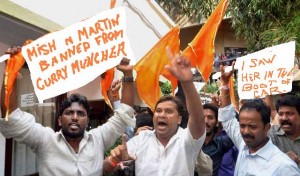 Martin outside the curry Muncher 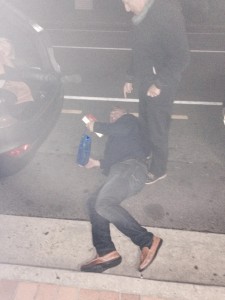 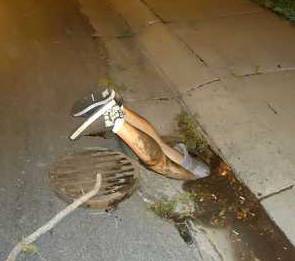 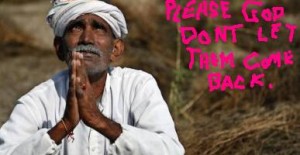 Circle end was called at 8:30 by the GM and Moonbeams abdicated his traditional right of “ending” to Josephine !

PS: The stand-In Scribe got home to Miss SA to be told your home too early and should have stopped for a beer on the way home !!! Funnily I’m sure I heard the back door shutting ??????