Executive Summary (for those who get bored reading too much):

The night of knights!!!!!….it has finally arrived….tonight was all about SIR TWO DOGS and SIR BOTCHOLISM and it’s going to be a long time until we have another knighting night in this hash because there are only three likely contenders for reaching this milestone in either their lifetimes or that of the rest of us, namely Ferret (916), Josephine (888) and Missing Link (754)….as for the rest of us…I cannot speak for anybody else, but I will be pushing up the daisies long before I get to knighthood status!!

In keeping with the “knight” theme, it was…you guessed it…a medieval night tonight!

It was pleasing to see that most of us, with the exception of the few who simply could not be bothered, went to great pains to procure garb of a medieval nature….and yes, Arabs did exist in medieval times so your trusty scribe, Missing Link and Miscarriage were entirely appropriately 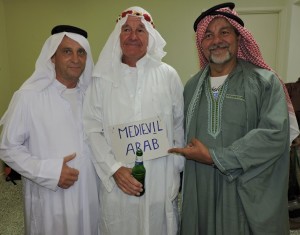 attired!!…the secondary intent behind this attire was also to rattle our resident Islamaphobe…he knows who he is!! It was nice to see that we all made such an effort for the two new knights. 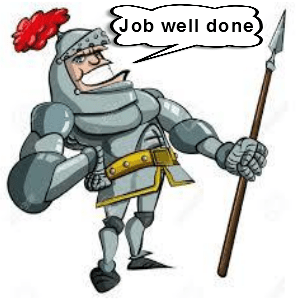 It must also be said at the start that the outgoing committee and some helpers have done a sterling job to make tonight such a resounding success. Sir Slab to be commended for the venue…Caustic and Sir Rabbit for setting the place up and of course…KB for ensuring that we all dined with nothing less than haute cuisine…and to all those who helped on the night by serving and clearing up…a great team effort guys!!!

We all gathered at Sir Slab’s shed in the backblocks of West Burleigh for the “run” and “walk”…the words are in inverted commas as really they were a bit of a token gesture as we all wanted to get back and get into the festivities. Your trusty scribe again did the walk this week…a good stroll and the drink stop was nice…that is about it..the run was probably much the same…but given that tonight was all about the TWO SIRS…who really gives a rat’s rectum about the walk and run!!!

In usual style, KB has regaled us with a fine Gourmet Hash menu consisting of:

And last but not least, on the menu was an item described as “slow baked pears with home made crème Anglais…which looked to me awfully like tinned peaches serves with lashings of custard!!

As you can see from the Hash pictures from the night, a great number of us went to a great effort to make this special for the TWO NEW KNIGHTS…particularly memorable though was Phantom, whose outfit of “King’s executioner”, complete with axe, bloodied apron, intestines hanging out of his pocket and severed feet was, to my mind at least, the most imaginative…great job Phantom!!

The most apt costume… 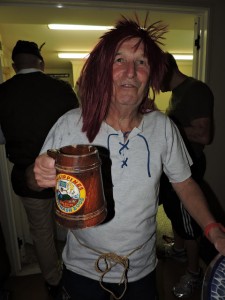 our beloved village idiot!! Some village in the midlands is obviously desperately missing him!!…one day he may go FLASHing back there!

The most formal part of the night was the knighting of SIR BOTCHOLISM AND SIR TWO DOGS…all performed with great pomp and ceremony by our substitute GM, Sir Prince Valiant. 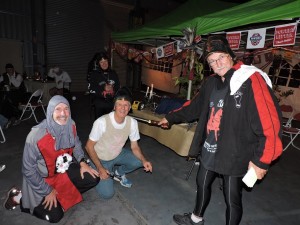 A rundown of the hashing history of the TWO NEW KNIGHTS was given by SPV…SIR BOTCHOLISM did his first run in February 1993 and also of significance, has been our webmaster since 1997…what a sucker for punishment!! Sir BOTCHOLISM summed up his feelings in one short, but touching sentence to describe his hashing times… “a great bunch of blokes!!”

SIR TWO DOGS…commenced his GC Hashing career in June 1990 and we were all touched by his acceptance speech wherein he said that the hash has provided him with many special memories and he numbers his hash mates amongst his dearest friends!! I am sure that applies to a lot of us, not just SIR TWO DOGS!!

The frivolities of the night:

If you weren’t there…it’s none of your f###ing business…if you were there, you know what went on!! What happens at Hash stays at Hash..right??

Another notable milestone of the night:

Congratulations must go to SIR SLAB… 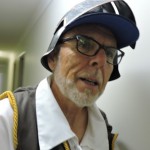 The Circle of sorts:

Welcome to JUKEBOX from Sydney…but ex-Kiwi who on the walk told me some interesting information about his good mate SIR BOTCHOLISM…now, how many crates of eggs went off the side of the pier with you Sir Botcho???????? 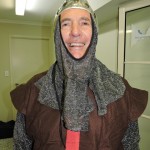 our Hasher out-posted to Bathurst most of the time.

The outgoing committee came out the front with most being abused by the gathered masses for their absolutely lousy attendance rate at Hash since they took their snouts out of the trough…..KB has only been 8 times since leaving office…despite what looked to be like a new leaf being turned with him actually running!! Swindler’s excuse on behalf of himself and many of the others… “but we’ve been overseas!!”.

Well, that’s my bloomin’ lot for this week…..