The run was set up under three joined shelters with good table space and benches.

A donated LED floodlight was set up and the sun shone again on all eager runners.

This run was to be flour marked (No, not petals) run on rain soaked ground from afternoon rain. The rain decided it was not going to join the run and stayed away.

The mounds of flower stood up to the soaked conditions. A runner did however near the end of the up hill trail went past it. When questioned, he replied. I did even see that. Guess who that was?

The walkers made short work of the laid trail, as it was water soaked and deviated back to the shelters. You know who they were. They had the cleanest running shoes.

The runners returned to mention the wet conditions and the maze of paths available to take by mistake.  Thanks to Brutus for sharing his mossy repellent with others.

At the last minute we were joined by Kitchen Bitch, whom was in such a hurry because was in bare feet and quickly had to dress. Next time arrive early to avoid giving any deadly noxious fumes before the run.

On completion of the run, we took notice of Truckie to get the floodlight in that sweet spot securely. A real good Boy Scout job.

At 6:15 pm our newly elected GM Weekly called the circle.

His new Cabinet of office bearers was introduced.  There were comments from some of the runners that the new Scribe should show his new pen. That middle finger nearly did present. All returning runners were mentioned.   Prince was the PA for that evening. The evening entertainment comedian gave a new view to vehicles.

Renault and Ford have joined forces to create the perfect car for woman.

Mixing the Renault “Clio” and the Ford  “Taurus” they have designed the Clitaruus”.

Who the f#%@ is Tina.  We all know her well-said Slug. Also all the massage parlors. A Down Down was then directed to Slug, and Ferret. May be for his bad influence to others.

After the AGPU some members had to get back using luxury cars. One individual got cabin sickness and did not want to change the appearance to the carpet, got out and barked at the tarmac. Now remember that the Indian meal did not have diced carrots. You know why….. Brutus ate all of them.

A Down Down for KB for presenting himself with no shoes.

How about Rabbit taking off with two goodie bags, one on each shoulder after the AGPU. On his return home there was a 45 minute transport wait. Where else better to spend spare time, non other than Harbor Town. The 707 bus arrives, maybe the last for that night. Hey… where is my Go Card. After a frantic strip search his bus card is found.

A well deserved Down Down for this fellow.

To add insult to injury, an enquirer was asked how Care Free got his black eye. It is believes it is from asking for 50 cents donation for his coffee with S bend.

To ease the pain, another Down Down was in order.

Truckie just had to mention that KB arrived home in a shoveled state.

Run report.  Presented by Slug after he returned after sneaking off to make the ground more soaked.  Because he straying away, be got what was due….. A Down Down!!!

Desert, an old Scottish recipe consisting of plaster of paris, oats and other secret mixes. The fermenting process of the Old Scottish desert gave it a lingering taste of alcohol.  In reality, all enjoyed it. Sir Rabbit was too chicken to taste it.

After the run report, which was said to be slushy but well marked, there was a Down Down to the Hare. .…. Mad Mike.

Blackie, Wrongway and Ferret gave the nosh report.  A question was asked if the Cous Cous was better than the old potato mash.

There is always a complaint from someone. Why did the local resident Possum, not join them at nosh time? He was too busy up the tree…..

A T-shirt was offered to the first buyer for $20. A superb Mothers Day present.

Brewtus closed the circle at 7:20pm 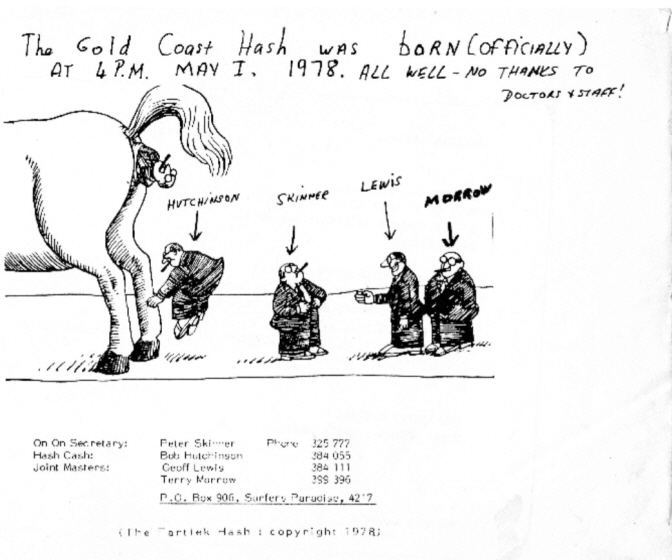 The joke in its entirety….

Renault and Ford have joined forces to create the perfect small car for women.

Mixing the Renault “Clio” and the ford “ Taurus” they have designed the “Clitaurus”.

It comes in pink, and the average male car thief won’t be able to find it – let alone turn it on – even if someone tells him where it is and how to do it.

Rumour has it though; it can be a real bitch to start in the morning!!

Some have reported that on cold winter mornings, when you really need it, you can’t get it to turn over.

New models are initially fun to own, but very costly to maintain, and horribly expensive to get rid of.

Used models may initially appear to have curb appeal and a low price, but eventually have an increased appetite for fuel, and the curb weight typically increases with age.

Manufacturers are baffled as to how the size of the boot increases, but say that the paint may just make it LOOK bigger.

The model is not expected to reach collector status.

Most owners find it best to lease one, and replace it when it becomes troublesome.