There was plenty of parking for all in a well-lit area. The chilly breeze abated leaving the evening very pleasant for a winter’s night.

S- Bends, our dedicated Booze Master, reminds us of America’s independence. Any reason to have a beer and celebrate.     Oldies beers will be $3.50 each.  Special Coors brew from the Rocky Mountains of the High Country Colorado is available for American Independence Day on the 4th July.

Very good value bottled wines are now available; the Shiraz wine will only be in casks.

The welcome Birthday beers will be made available, only after all runners have made it back to the start. The Down- Downs will have more of a kick with light beer or otherwise requested.

Sweat Hog, the hare explained the chalked arrows to the runners and reminded that there were a few check marks in place on the run.

There was congratulation for one of our senior runners. Blackie. He is like the Johnny Walker whiskey advertisements, still running after 78 years. Well done.

Aussie played Father Christmas in July by donating a bag of T-shirts to all to help them selves to. Some pleased faces were noticed.

It was good to see Miscarriage back at the circle. His braced leg looked uncomfortable for him from that painful cow-kick a few weeks back. A speedy recovery Miscarriage.

GM Weekly advises there are some serious items to get through. Firstly the War Office is active in investigating the disappearance of the Winston Churchill cigar from last week.

As a last resort the GM had a spare, but failed to locate it in his attire. After a while this was retrieved from deep packets with many other nasty items. Maybe the missing one is in the Top pocket. The case continues. There must be a smoking gun around somewhere!?

The Booze Master, S-Bends further informs of the changes of the beer and wine price. All requests will be considered on the Down –Downs.

Run Report. Missing Link.  This was a good run and marked arrows were well displayed. Nasty reported the run as excellent.

Nosh report.  This was a good traditional meal. The rise was well cooked and the bread rolls buttered on both sides. What more can one ask for?

Prick of the Week. Truckie entered the circle with the carry bag. The trophy was to be given over to Caustic or Nasty. Nasty received this as Caustic was absent. A down down followed.

After a joke of a wife asking her husband if he could survive on $800 a year as this was the equivalent of his spending on a lady of the night.

Botcho, Carefree, Proxy and Hard On and later Shat were in the circle.  After further friendly teasing all were given a down down.

The GM gave a run – down of some special planed events. There is to be a bike ride starting from the Southport Council Chambers. The ride required answers about Southport surrounds and history. The answers are to be noted in Passports. These will be made available to all riders or walkers. The date will be on 9th August 2018 starting at 9:30am.

Kwakka and VD will be doing the next two runs. This is said to be a French Run.

A Happy Birthday was sung in honour of Blackie for attaining a senior age. There is a runner more senior in age, but no name was mentioned. I wonder who this is?

Mention was given to Swollen Colon’s birthday on Saturday night. All enjoyed this occasion. Swollen Colon was in full swing entertaining all his friends though out the evening. Unfortunately he over hydrated and had trouble negotiating the run route on Sunday’s marathon. The ambulant crews had to be advised of his delicate position.

Antonia, a passing stranger on a bike was encouraged into the circle as he was curious about all these people having fun in the car park.  A runner dinged the stranger’s bikes bell, the GM rang his own on the walking stick and a bell melody was created. The Bells of Sundale Bridge.

We were advised that Nasty was in training for a Hollywood stunt man. He now has had plenty of practice of going head over heels on his pushbike handlebars. He does this over and over again. He is ahead of every one else at this.

A charge was laid against S-Bends by Swollen Colon. Why the hell did the cooler box contain a bottle opener if all beer cans had a self-opening tag on each can? Is this a trick question?

The GM mentions that our new member Nick has no name as yet.

Nick was requested to close the circle. The runners were invited to stay behind to enjoy a social drink.

THERE IS NOTHING GOVERNMENT CAN GIVE YOU THAT IT HASN’T TAKEN FROM YOU IN THE FIRST PLACE. 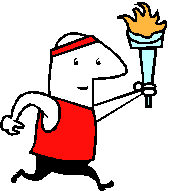