AKA – A trip down memory lane

The long awaited and anticipated BlueCard 70th finally aired on the weekend. The venue, Swindler and Madame Swindler’s country estate in the shadow of Mt. Warning, was ideal. Swindler was also having a birthday albeit just two days later than BC. A lot was packed into just 40 hours of non-stop events and feasting.

It all started on the heliport at 4pm Friday. No helicopters were allowed to land, as the site had been re-purposed as a caravan park and glamping site. 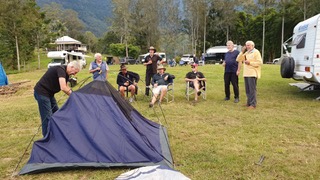 BrenGun being helped to erect his tent

After an hour or three of pre-dinner drinks it was off to Flutterbies in Tyalgum for the initial feast of pizza washed down with a variety of quality wines. 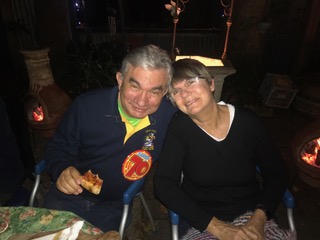 A romantic BlueCard with Madamoselle BlueCard

Then back to camp for campy campfire stories until everyone was tuckered out from travel, tall tales and over indulgence.

Next morning dawned clear and some slept in. 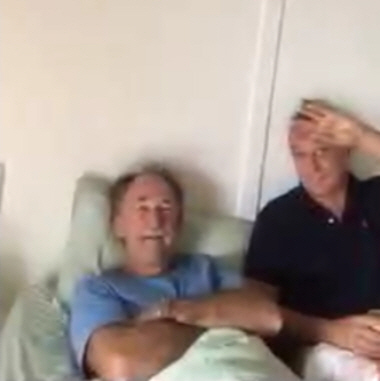 A group of keen cyclists went off to try the country lanes.

On their return it was a 70-minute exploration by all of the boundary fences led by Swindlers brother in law Paul. Son Darren had recently done a great job slashing a trail around the property to allow walkers to make it without too much discomfort.

Nearing home we passed Darren, again on the tractor/slasher, on his way to start the lunch fire on the crest overlooking the estate.

Back at base we observed the 11.30am commencement of the cooking of the dinner lamb.

An amazing amount of expertise assembled for the job

We were then loaded into 4wds and back up the hill for a country lunch including billy tea and cake. 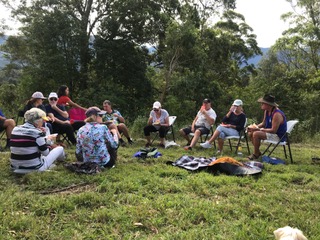 After lunch was spent reading, snoozing or advising on how to cook the lamb that was slowly turning on the spit. 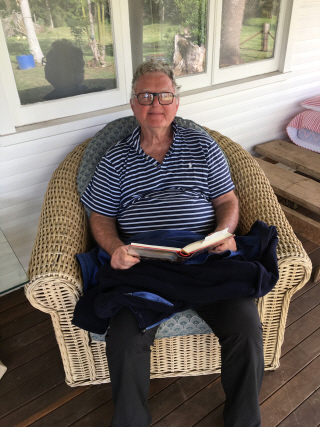 Reading prior to snoozing

Then at 4 the evening got underway, first the hour or three of pre dinner drinks watching the spit bring the lamb to perfection by just after 7pm in time for the ceremony of removing the lamb from the spit to where it was carved in expert style by KB who had appeared out of nowhere in traditional chef attire. 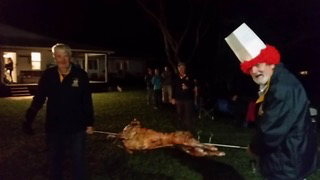 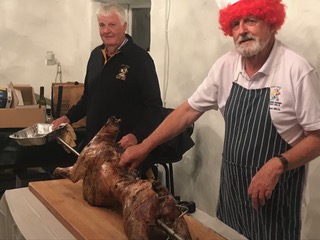 The placement for carving

Before the main course we were treated to the most divine pumpkin soup whilst the lamb and accompanying roast veg and ratatouille were receiving the final touches.

The meal, which ended with a supreme dessert, was voted meal of the year, so much so that all present immediately booked in for next year.

Then came a speech by BlueCard 70 who thanked everyone and told a story about his 50 year mate Swindler and a BBQ he borrowed from Swindler when they were in their 20’s that Swindler has never seen again. In his response he told a similar story of getting one back on BlueCard 70 in return. 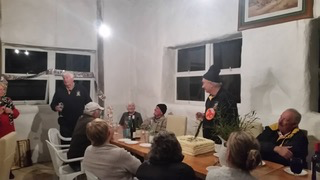 BlueCard explaining that he would not be sharing his birthday cake with anyone else.

More after dinner drinks around the fire before weariness took over.

The weekend’s formal events were rounded off with a Sunday breakfast of farm eggs, Border Range bacon, local tomatoes and mushrooms.