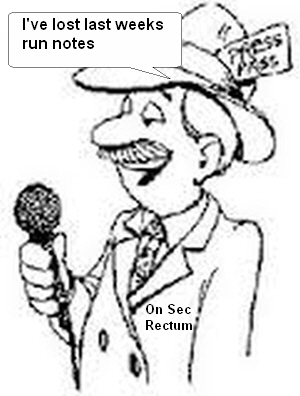 We left the venue towards the toyota garage on a well marked trail, checks commenced immediately and continued throughout the entire run. There was a nice use of bush/parkland and the checks kept the pack together. The pace seemed high – somewhere between usain bolt and sally pearson. By the finish we had nearly regrouped so very few stragglers this week.

A thoroughly enjoyable run in all aspects, nice to see the criticism had been heeded.

On the plus side, a lot of time and effort put in, more food than you could shake a stick at (couldnt finish my mains) and very tasty to boot. On the down side, the horse hair noodles were infact horse hair and the omelette tasted like cardboard soaked in hospital grade disinfectant and drizzled in maple syrup.

Circle started with a bang, fireworks thanks to Swollen, then Princy was informed by his princess that a grandson and potential hasher had emerged into the world. DD to both.

The GM, decked out in a punk rock boxing tribute outfit called out the hares (2735 runs bteween them) it was commented that even with 100 years experience they still know f#ck all.

A visitor enjoyed the run, scoring 9/10 but that didnt count.

Returners/visitors – Tom, Hollywood and Swindler. Pressies for the GM, Botcho and Jigsaw (who had come dressed as the predator, almost impossible to see him in certain lights.)

No Caustic this week due to an unprovoked attack by a bottle of vodka.

POW, VD called out many but selected a ‘wall flower’ – Kwakka for being a wednesday warrior and decorating the table.

Rectum tried his hardest to give a DD to the GM and if this had been a hollywood film the GM would have sculled it like a man, however he shimmied to the left and passed it over to a speechless RA. You didn’t deserve that.

Dont forget the gala event – cocktails at Ferry road, 1st Dec unless the GM cancels it five minutes before its due to start.

End of circle by Moonbeams

Huge thanks to Slab and Princy and the cast of thousands, a very good night.

Sorry its late, not spell checked and a bit light on the ground. Done on the mobile in Noosa